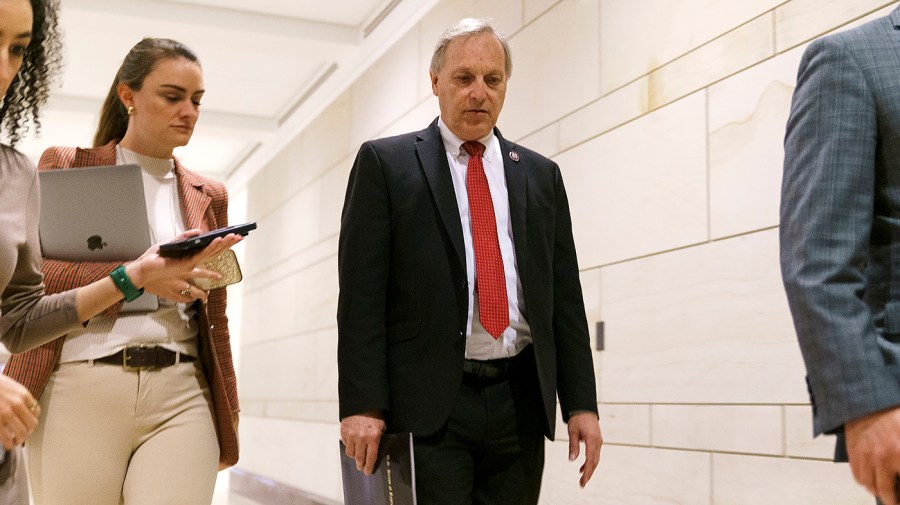 “We have a new paradigm here, and I think the country wants a different direction from the House of Representatives. And it’s a new world, and, yes, I’m going to be nominated tomorrow to — to the position of Speaker of the House,” Biggs said on Newsmax.

The Arizona lawmaker had argued last week that the party should reconsider rallying behind McCarthy, who announced his bid the day after the midterm elections.

McCarthy won an internal vote for House Speaker 188-31 Tuesday, but will still have to gain a majority vote of 218 when the next Congress begins on Jan. 3, assuming a fully sworn-in House.

Republicans’ “red wave” failed to rush over the nation with hoped-for GOP wins in the midterms, and Democrats were able to buck historical precedent and hold onto power in the Senate and put up a tougher-than-expected fight for the House.

Now, a week after Election Day, votes are still being tallied to determine which party will snag the lower chamber majority. Republicans believe they’ll grab control with a slim majority.

Here are five things to know about Biggs as he makes his bid to take the top Speaker spot and challenge longtime GOP leader McCarthy:

The caucus is known for its confrontational tactics and willingness to criticize House GOP leadership, making the group a potential challenge for McCarthy if he does become Speaker of the House.

The group has also pressed GOP leadership to make rule changes that would empower individual members in the House Republican Conference, including a tweak that would let any member to make a “motion to vacate the Chair,” or oust the Speaker.

Introduced articles of impeachment against Mayorkas

Biggs has introduced articles of impeachment against Homeland Security Secretary Alejandro Mayorkas, a target of conservatives critical of the Biden administration’s policies and action on the U.S.-Mexico border.

“Mayorkas and [U.S. Attorney General Merrick] Garland have purposefully made our country less safe, politicized their departments, and violated the rule of law. In some instances, they have instructed their subordinates to disobey our laws. That is unacceptable,” Rep. Andy Biggs (R-Ariz.) said earlier this year.

“Next January I expect the House to pursue my impeachment articles against Mayorkas,” he added.

McCarthy has also expressed impeachment could be possible for Mayorkas if the secretary was found to be failing in his task to secure the border, though the likelihood of any success for such an initiative is low in a Democrat-led lower chamber.

Biggs and Arizona Sen. Kyrsten Sinema (D), who has been accused by others in her party of apathy on some of her party’s issues, have been friendly since their days working together in the Arizona legislature.

"I love Andy Biggs. I know some people think he's crazy, but that's just because they don't know him," Sinema said of Biggs, according to New York Times reporters Jonathan Martin and Alexander Burns in their book “This Will Not Pass: Trump, Biden and the Battle for America’s Future.”

Biggs is one of the most conservative members of Congress, has resisted President Biden's 2020 win in Arizona, which he flipped from red to blue.

Rep. Ruben Gallego (D-Ariz.) on Sunday said Sinema “did nothing” to help Arizona Democrats in the midterm elections and accused her of wanting her party to lose.

The Arizona Republican weighed a bid to jump from the lower chamber up to the Senate.

Biggs said last year that he was “seriously considering” a run as former President Trump readied to boost his supporters in their midterm bids.

Biggs, a longtime ally of the former president, would have faced off against incumbent Sen. Mark Kelly (D-Ariz.), who was projected last week to defeat Republican challenger Blake Masters in one of the races that was key to boosting Democrats to hold their Senate majority.

The congressman ultimately decided to run for a fourth term in the House and was projected to win his district by a wide margin.

Subpoenaed by the Jan. 6 committee

The former Freedom Caucus Chair has come under scrutiny for his involvement in the Jan. 6 riot after he touted Trump’s false claims of election fraud during the 2020 presidential election.

The Jan. 6 committee subpoenaed Biggs and a handful of other GOP House lawmakers, including McCarthy, after the targets refused to voluntarily testify.

The committee alleged that Biggs was involved in “plans to bring protestors to Washington for the counting of Electoral College votes” and "efforts to persuade state officials that the 2020 was stolen.”

The panel named Biggs among a number of Republican lawmakers who asked for presidential pardons for their role in trying to overturn election results in certain states on Jan. 6.

Today24.pro
Billionaire investor Howard Marks touts a bargain boom as interest-rate fears grip markets - and predicts a surge in companies going bankrupt One of The Greatest Britons in History - Joe Calzaghe I make $1,000 a month by promoting Amazon products on social media. It only takes 5 hours per week — here's how I set up my side hustle. ‘How many Uber drivers does it take to pick up a disabled person?’: Disabled person says 3 Uber drivers canceled on them because of their service dog