KSI has revealed he will name his next boxing opponent on SATURDAY.

The 29-year-old YouTuber turned boxer returned to the ring back in August and beat two men in the same night at the O2 Arena.

Now he is set to confirm when and who he will be facing next as he continues to turn his attention back towards boxing.

KSI will make the announcement at the Misfits Boxing 3 event – which is being headlined by Hasim Rahman JR vs Vitor Belfort.

On Twitter, he said: “Everyone gets to find out who I’m fighting next this Saturday.”

KSI has only had one official professional fight – which came in a split decision victory over Logan Paul in 2019. 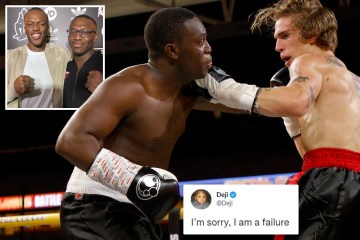 He returned to the ring against fellow internet star Swarmz and journeyman boxer Luis Pineda earlier this year.

And he knocked both of them out, leading many to call for a clash with Jake Paul.

But that is not expected to be next – with 6-0 Paul rumoured to be facing Tommy Fury in February 2023.

Meanwhile, KSI’s brother, Deji, was stopped by Floyd Mayweather in an exhibition bout over the weekend.

Yet despite the defeat, Deji was proud of his performance – in which he gave legendary fighter Mayweather a swollen eye.

Can I smoke marijuana in my backyard?