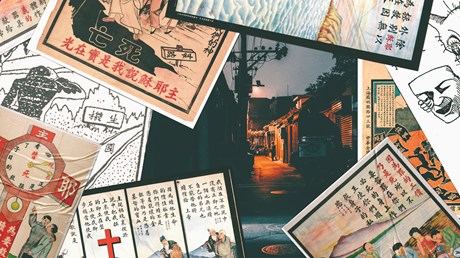 Between 1927 and 1949, millions of Christian posters appeared on the streets of China.

These posters challenged, co-opted, and subverted political messages in circulation and daringly portrayed an alternative vision of national salvation.

Chinese Christian artists used familiar techniques and symbols to proclaim that the kingdoms of this world, whether Nationalist or Communist, would fade before the kingdom of Christ.

From clocks and masks to roads and floods, Christians deployed common propaganda symbols of their day to point people toward Jesus Christ, China’s only true hope for salvation.

The Chinese Nationalists bulldozed their way to power in 1927, rumbling north to Beijing behind a phalanx of pamphleteers. Their leader, Chiang Kai-shek, and his lieutenants preferred posters and handbills over bullets and bombs. They placarded the country with posters of the Nationalists liberating China from calamity and exploitation. The Nationalist Party wanted to win the heart of the nation, not merely browbeat it into submission.

J. Sidney Helps, the general secretary of the Religious Tract Society for China (RTS), a major producer of Christian literature and evangelistic tracts, watched in amazement as the revolution was achieved “using our means and improving upon them.”

Propaganda established the new masters of the Middle Kingdom, he concluded. Could not Christians use the same tactics to inaugurate the kingdom of God?

“Do propaganda work for [your] Lord and Master,” Helps challenged fellow believers that same year.

Millions of Protestant propaganda posters entered the Chinese market. Copied onto the cheapest paper and plastered on walls ...

I’m a big-chested girl – it’s hard to find bikinis to fit 36DDDs without side boob, but I’ve found the winning formula