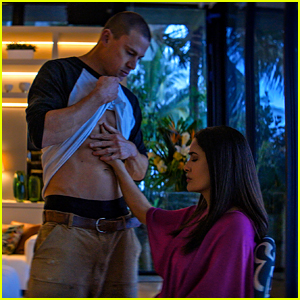 Channing Tatum is reprising his role as Mike Lane and Steven Soderbergh returns to the helm with a script from Reid Carolin, who also wrote the first two films. Salma Hayek is also set to star in the new movie.

Here’s a synopsis: “Magic” Mike Lane (Tatum) takes to the stage again after a lengthy hiatus, following a business deal that went bust, leaving him broke and taking bartender gigs in Florida. For what he hopes will be one last hurrah, Mike heads to London with a wealthy socialite (Hayek Pinault) who lures him with an offer he can’t refuse…and an agenda all her own. With everything on the line, once Mike discovers what she truly has in mind, will he—and the roster of hot new dancers he’ll have to whip into shape—be able to pull it off?

You might want to know why Channing almost turned the role down and if another star from the franchise is back for the final movie.

Public scrutiny of Amy Robach & TJ Holmes will ‘drive a wedge’ and ‘resentment’ could break them up, expert reveals

Today24.pro
The Darkest Secret and Tragedy of Edwin Valero Anthony Joshua returns to America in search of new coach ahead of boxing return and links up with trainer Virgil Hunter Hans Niemann in the sole lead at the 3rd El Llobregat Open Why the power grid is an 'attractive target' for domestic terrorists: report