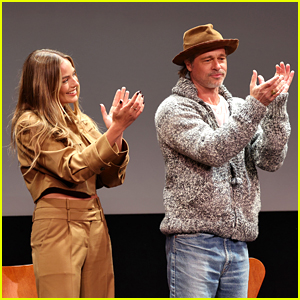 The first screening of the movie Babylon just took place and reactions from critics have been revealed!

Brad Pitt, Margot Robbie, director Damien Chazelle, and more were in attendance for the event at the Samuel Goldwyn Theater on Monday night (November 14) in Los Angeles.

Official reviews are still embargoed, but critics were allowed to share their thoughts on social media after the screening. It seems the reactions are all over the place at the moment, with some loving the movie and some not being into it.

Click inside to read what people are saying about the movie…

Babylon will be released in theaters on December 23. Read the first reactions below and make sure to watch the trailer!

Extravagant, decadent and all together delightfully delicious. @babylonmovie is phenomenal filmmaking . This is Damien Chazelle’s love letter to movie making, and Margot Robbie’s best performance to date. The score is outstanding. pic.twitter.com/86zpBANE8D

#Babylon feels like if someone read Damien Chazelle the story of Sodom and Gomorrah and then he said, "hold my beer!"
High octane, cocaine-inducing trip. First half is great. Likely the internet's new favorite movie of all-time. Margot Robbie and Justin Hurwitz are your stars. pic.twitter.com/aM3rru1so0

Babylon is a fever dream of a movie that’s best when it’s being a straight out comedy. The drama barely plays. Pitt and Jovan Adepo give the best performances in the movie. Robbie gives it her all but the character is so one note. Didn’t love it.

BABYLON: Truly monstrous in its thudding insistence on shoving the viewer’s face in the muck and claiming it’s something novel or moving; Chazelle might be the most confident director in Hollywood today, of course he’s also got some of the worst instincts out there.

Damien Chazelle brings buckets of energy to BABYLON, but it’s never not pounding and obvious and, finally, uninsightful. Everything about it is borrowed — even down to Tobey Maguire stealing the film as its Alfred Molina. A Scorsese coke film by a squeaky clean director.

#Babylon/#BabylonMovie is a daring Hollywood epic that utterly shocks the senses. Margot Robbie and Diego Calva give huge performances. Damien Chazelle incorporates his signature musicality and movement throughout. Justin Hurwitz’s score is one hell of a wall of sound. pic.twitter.com/RTlL9WhaKa

Babylon is an ambitious mess of a film. I don’t even know where to begin with this one but the tone is all over the place. Margot Robbie tries but the script fails her. A love letter to cinema that made me hate cinema. #BabylonMovie pic.twitter.com/BnKQiOz2Zd

Babylon is A LOT of movie – a purposeful mess, a journey more than a film that feels every bit as much a the town it encompasses. There is a storyline I'm questioning… but Margot Robbie and Diego Calva are ???????? and the music!!! Oomph, the music and visuals are ????!!!

A coked-up Margot Robbie projectile vomiting all over the face of a stuffy old man in a tux pretty much sums up the chaotic energy and glorious messiness of BABYLON, truly the strangest, most debaucherous love letter to Hollywood ever.

I have some really — really — bad news to share with you, #Babylon’s a flaming hot mess, a tonal disaster, easily Damien Chazelle’s worst film & one of the worst films of 2022 ????

Mavericks vs. Jazz: Start time, where to watch, what's the latest