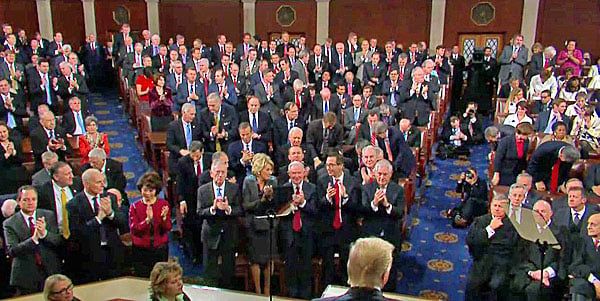 Republican Rep. Andy Biggs of Arizona will mount a challenge to Rep. Kevin McCarthy to become leader of House Republicans and most likely Speaker of the House, Biggs announced on Monday.

“I think the country wants a different direction from the House of Representatives,” Biggs said in a Newsmax appearance Monday night. “It’s a new world, and, yes, I’m going to be nominated [Tuesday] for the position of Speaker of the House.”

The House Republican Conference will hold leadership elections on Tuesday to elect its leader, who will be the conference’s official nominee for Speaker of the House when elections to the position are held in the 118th Congress, beginning on Jan. 3, 2023. Republicans will likely win a majority in the House after the Nov. 8 midterm elections, which will enable them to elect the Speaker in a party-line vote.

Jaime Raskin is worried Trump could become Speaker of the House

“One potential candidate who’s name has been floated is Donald Trump himself because the Speaker of the House does not have to be a member of the House."

McCarthy had been widely expected to ascend to the speakership without any opposition, nearly seven years after he was denied the position by rival conservative factions within the conference. However, the lackluster election results, with no “red wave” being apparent, may have weakened McCarthy’s standing in the conference and emboldened the same factions that denied him the speakership in 2015.

“I have personally stated that Kevin McCarthy has not done anything to earn my vote,” said Rep. Bob Good of Virginia, a member of the House Freedom Caucus, a sub-group of populist House GOP members who were elected in the “Tea Party” movement during the 2010 midterm elections. Additionally, Rep. Chip Roy of Texas has said that “no one has 218 votes,” the number required to elect a speaker, in comments to NBC News.

Biggs’ challenge represents the Freedom Caucus’s rebuke of McCarthy, which could thwart his chances to be elected Leader. Biggs was previously chair of the Caucus, which currently has 43 members from among the GOP conference.

A few members of the House GOP have come out as total opponents of McCarthy, in that they will not support him regardless of whether other candidates run.

“There are definitely at least five people, actually a lot more than that, who would rather be waterboarded by Liz Cheney than vote for Kevin McCarthy for Speaker of the House,” said Rep. Matt Gaetz of Florida on a radio show hosted by former White House advisor Steve Bannon.

House Republicans will also hold elections for the role of Conference Chair, a position held by Rep. Elise Stefanik of New York, who has been endorsed for the role by former President Donald Trump, but who has been challenged by Rep. Byron Donalds of Florida. They will also elect a Vice Chair and Secretary.

McCarthy and Biggs’s offices did not immediately respond to a request for comment.

The post Fresh name jumps in fight to become new speaker of the House appeared first on WND.