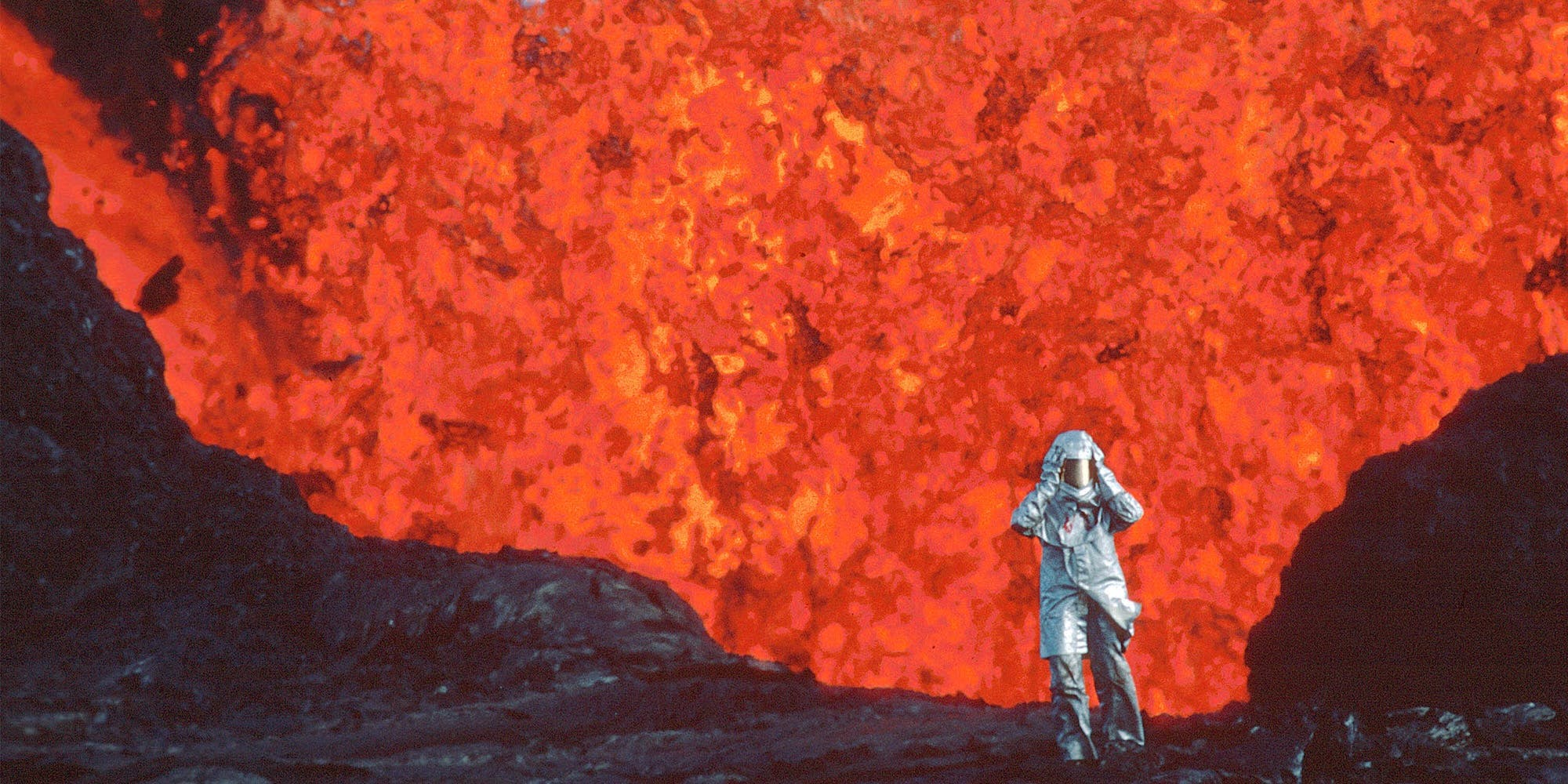 Fire of Love, Sara Dosa’s new documentary that chronicles the lives of married French volcanologists Katia and Maurice Krafft, is, at its heart, a love story. It’s one that, thanks to inquisitive narration from director Miranda July (Kajillionaire), sets an aura of intrigue around Katia and Maurice that’s not unlike the volcanoes they devoted their lives to studying; even how they met is shrouded in mystery as several different stories are floated around as if they’re theories to be dissected. But their true love, apart from each other, were the volcanoes they traveled to, studied extensively, and—several decades after they met, fell in love, and married—would eventually kill them. It’s a sentiment that Maurice Krafft himself even voices, noting that “Me, Katia, and the volcanoes, it is a love story.”

RELEASE DATE: Nov. 11, 2022 (Streaming)
DIRECTOR: Sara Dosa
STREAMING: Disney+
Through a series of old interviews, a stunning array of archival footage, and narration from director Miranda July, Sara Dosa relays the life story of volcanologists Katia and Maurice Krafft, who spent decades studying active volcanoes around the world together. The Kraffts’ footage alone is a compelling watch, but the two love stories woven throughout the narrative—one between Katia and Maurice, the other between the Kraffts and the volcanoes they strove to understand—provide its fiery emotional core.

We’re aware of the Kraffts’ great tragedy—one that feels like it could easily be turned into a movie one day—from the start: If you knew absolutely nothing about Katia and Maurice Krafft beforehand, July tells us very early into Fire of Love, as footage shot of the couple on June 2, 1991, at Japan’s Mount Unzen is shown, that “tomorrow will be their last day.” It’s a factoid and a date that looms large in the otherwise chronological exploration into their lives. But it doesn’t take anything away from those love stories, which serve as the film’s central throughline to full effect, and the results are profoundly moving.

If Fire of Love was mostly just archival footage of volcanic eruptions and lava, it would be compelling in its own right—which I imagine looks even more incredible on a big screen—with much of the footage coming from Katia and Maurice Krafft’s archives. According to the film’s press notes, the French archival house Image’Est (which had the footage that the Kraffts shot on 16mm film) digitized 200 hours of footage on top of the 20-30 hours that had already been scanned, and the footage is astounding in its depth and detail. (Some archival footage previously appeared in Werner Herzog’s 2016 documentary Into the Inferno.) Edited so that some of the images appear side-by-side, Dosa leans into French New Wave in an attempt to complement some of the more stylized filmmaking choices of the Kraffts.

Several sequences show the movements of layers of lava folding in on itself or shifting before it cools, but it’s far from the only footage the Kraffts captured. You can catch glimpses of new life sprouting from cooled lava, of Katia and Maurice relaxing—the latter speaking of dreams to one day be able to travel on lava by canoe and going as far as to attempt a trip on an acid lake; it’s a story that he would perfect in interviews. Maurice Krafft insisted he wasn’t a filmmaker, but then there are scenes that feel as though Krafft attempted to capture the feel of a spaghetti western. (“What, or who, was [that footage] for?” July pondered.) But much of the footage they shot would be vital to their work because, as Katia put it, everything happened too fast in real time to study on the spot.

Between the bouts of volcanic footage, Fire of Love starts to give some insight into just who Katia and Maurice were. Their first loves were, fittingly, volcanoes—Katia’s was Mount Etna in Sicily while Maurice’s was Mount Stromboli, which was north of Sicily—and their work in and out of the field complemented one another; Katia was interested in details while Maurice was more of a big picture guy. Whenever they had to return home, Maurice edited and made the films from their footage and Katia wrote books detailing their findings. They became famous in their own right and crafted their public personas with Maurice being called “Volcano Devil” by the media. They had friends and loved ones at home, and a growing network that would alert them whenever a volcano looked like it was about to blow, but their true home was the volcanoes.

They were both driven by a drive to find “something beyond human understanding,” and at times, volcanoes seemed to make more sense than humans. That point is driven home when tragedy strikes, one that could’ve been prevented had a local government heeded their warnings, prompts them to change exactly what they focus on. Even when humanity puzzled them, they wanted to help them. As Maurice put it, “I believe that by living on volcanoes away from humans, I’ll end up loving humans.”

There are plenty of questions that Fire of Love raises, and it doesn’t always have answers. But watching the destruction and beauty of the volcanoes that enchanted the Kraffts might start to provide something worth delving into.

Fire of Love debuted at the 2022 Sundance Film Festival and was acquired by National Geographic. It is now streaming on Disney+.

The post ‘Fire of Love’ blends volcanic wonder with an emotional love story appeared first on The Daily Dot.