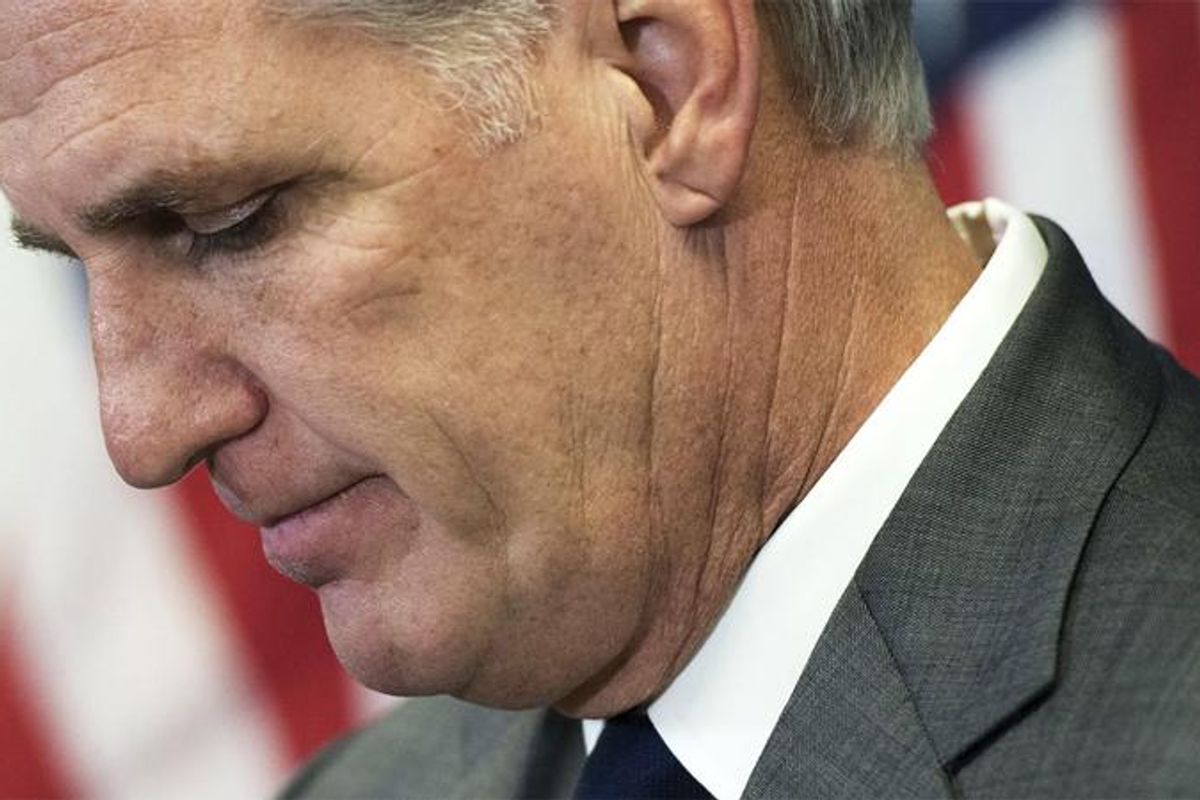 Republican strategist made several pivotal errors during the runup to the 2022 midterm elections, according to a new Politico report.

Among the main mistakes was their response to the Supreme Court overturning Roe v. Wade.

"The House GOP campaign arm convened its top strategists in late summer to weigh how to react," said the report. "After some debate, a fateful consensus emerged among the party’s top messaging pros: They wouldn’t respond at all. The group decided it was imperative Republicans stay trained on the economy and voters’ cost-of-living pain. The National Republican Congressional Committee urged candidates to maintain their focus there even when under attack on abortion."

Republicans failed to understand the economic piece of abortion, however.

IN OTHER NEWS: Here's the real reason Trump wants to announce his candidacy now — and it's not about money

“We missed that as a party. Some of the states went really extreme with their health care for women, and it hurt us,” GOP strategist Sarah Chamberlain, who runs the centrist Republican Main Street Partnership, told Politico. “Kansas should have been a wakeup call. And I know we thought it had peaked, but it had not peaked, obviously.”

Instead, Republican men from pollster Frank Luntz to pundit Scott Jennings dismissed the issue as important. Some even went so far as to suggest that the ruling was so long ago that women wouldn't remember it when casting votes. Even progressive columnist Joan Walsh wrote in The Nation that voters didn't remember all of the legislation passed by Democrats over the summer like lowering prescription drug prices, a gun safety bill and an inflation reduction package.

But Walsh also remarked at the time that there was no real precedent, much less a polling model, to match the impact of the Dobbs decision.

Democratic pollster and founding partner at HITStrategies, Terrance Woodbury, explained in a pre-election discussion that most poll look at "likely voters," which calculates people who have voted in three or four elections. Anyone mobilized by the 2016 election isn't going to be counted, even if they voted in 2018 and 2020. So, no polls anticipated the wave of young voters that were mobilizing. It also didn't count women who sat out 2018, not thinking they were a mid-term voter.

Those factors only reinforced the GOP's assumption that no one would remember losing one of their personal freedoms.

"No one moment was the singular undoing of House Republicans’ lofty hopes. But GOP leaders, in their confidence about winning the election, underestimated how much abortion and concerns over extremist candidates would galvanize the Democratic base, shrinking the battlefield," said Politico. "The handful of bluer-leaning seats in New York and elsewhere that Democrats did lose didn’t herald a red wave, but instead became confounding outliers."

Capturing the GOP strategy in one photo, Politico described an Election night "party" that never happened in an upscale hotel ballroom. There Kevin McCarthy was huddled with Newt Gingrich, who hasn't been in elected office for 24 years.

But among Democrats, outside groups started "a TV ad campaign that would carry through the fall. Since July, Democrats have spent some $120 million on abortion-focused advertising," said Politico cited media tracking firm AdImpact.

The report cited Rep. Elissa Slotkin's (D-MI) race against Tom Barrett. Before Dobbs, she was polling down by high single-digits. By mid-September, Barrett was down and she ultimately won by 5 points on Election Day.

“I don’t think that was all Dobbs, because he had a lot of negative spending going on at the same time,” said Barrett consultant Jason Cabel Roe. “But I don’t think you can ignore the role Dobbs played in it.”

But while the tide was turning, Republicans decided to stay the course on inflation, gas prices, and the economy.

"He urged them to stay the course," said Politico. "Unless there was empirical data demonstrating the need to respond on abortion, Emmer said, candidates should not veer from the economy."

“In every survey, we’re doing, the economy was by far the No. 1 issue,” Politico quoted veteran pollster George Nassar. He was in the room during the discussions about whether to respond to the Dobbs decision in campaigns. “Let’s stay laser-focused on the economy, and we’re going to win this thing. Why even get dragged into any type of debate on anything else?”

The numbers showed exactly what Woodbury explained it would. Young people and less-frequent Democratic voters came out to vote. Meanwhile, Democrats were able to frame the GOP as so extreme that Independents went the Democratic Party by a large margin.

Today24.pro
One of The Greatest Britons in History - Joe Calzaghe Billionaire investor Howard Marks touts a bargain boom as interest-rate fears grip markets - and predicts a surge in companies going bankrupt ‘How many Uber drivers does it take to pick up a disabled person?’: Disabled person says 3 Uber drivers canceled on them because of their service dog Crypto Lender Matrixport Raises Valuation to $1.5B Despite FTX Collapse