A FARMER has claimed supermarkets are contributing to the egg shortage by not paying British farms a “fair price”.

Supermarkets across the country are experiencing shortages of eggs, with shoppers facing empty shelves.

Asda confirmed to The Sun that shoppers can only purchase two packs of eggs each at all of its 630 stores across the country.

And shoppers have spotted signs at one Lidl store warning customers they can only buy three each.

Meanwhile, Tesco and Sainsbury’s have warned customers they are having supply issues. 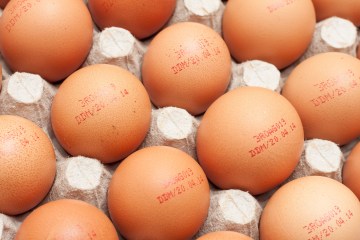 Why are eggs unavailable in supermarkets today? 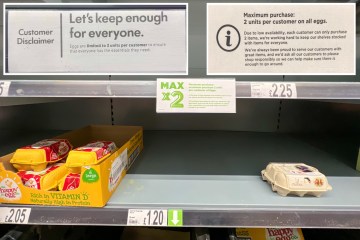 It comes after The Sun exclusively revealed that Britain’s biggest supermarkets were bracing for egg rationing due to supply issues partly because of an outbreak of bird flu.

But in a video posted on Twitter, the Welsh farmer said the shortage isn’t just down to bird flu.

He claims supermarkets aren’t paying British farmers a fair price, and are instead choosing to import their eggs from countries like Italy.

It comes at a time when farmers are facing soaring production costs too due rising energy bills and soaring prices of essentials, such as fertiliser and animal feed.

Speaking in the video, Ioan said: “They have now decided to import eggs from Italy. I’ve got no problem with the Italian farming or the Italian egg industry.

“Nothing at all. But we have the infrastructure in the UK to be producing these eggs.

“Because we’re not getting a fair price in the UK, we’re leaving sheds empty.

The Sun has contacted all the major supermarkets for comment.

Morrisons said it currently has no major supply issues and only sells British eggs.

Andrew Opie, director of food and sustainability at the British Retail Consortium told The Sun earlier that supermarkets are “working hard to minimise” impact on customers.

Pub chain Wetherspoons has also been hit by shortages and is offering customers alternative items instead.

The shortage of eggs has been partly caused by another outbreak of avian flu but also a delayed knock-on impact from millions of birds dying during the summer’s heatwave.

In August the Department of Environment, Farming and Rural Affairs had said that it was “deeply concerned” about the scale of chicken mortalities in industrial chicken sheds as birds died from heat exhaustion when temperatures reached record highs.

It is understood that a lot of the birds that died were broiler chickens – those reared for consumption rather than laying eggs.

The problems have been exacerbated by a number of farmers exiting the industry, with fewer laying hens than ever before, because rising costs has meant it is harder to make a profit.

Supermarket sources told The Sun that there were already shortages of some eggs, particularly medium sizes.

Food manufacturers are already having to turn to overseas egg suppliers to deal with the shortages of “liquid egg” which is used widely in baking products.

All turkeys and chicken are now having to be kept indoors to protect birds from avian flu and a rapid escalation on farms.

Entire flocks of birds can be culled if they catch the disease.

Legal sizes for lobsters could change to protect population

Best Italian restaurants in Saratoga Springs, according to Yelp