A TIKTOKER has shown just how hard online dating can be after sharing a recent horror story about meeting an online match in real life.

Influencer Jess Alexander, who goes by @omg_jess on TikTok, said her date with a man she met online went from bad to worse.

“I got asked out on my first date in months,” she began.

“The guy seemed cool, he seemed funny, whatever.”

When the day of the date came around, the man sent Jess a photo of himself.

“I go, ‘Oh my God this is not the same man.’ He knew his angles and was strategic about it, but I had already said yes, so I can’t back out now.” 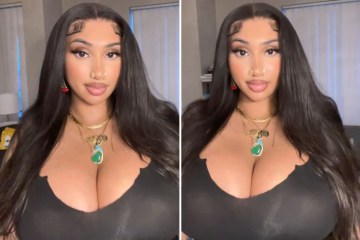 They walked into a sushi restaurant and the waiter informed them that the kitchen was closing in the next 30 minutes.

“What?! He didn’t even look up when the restaurant closed.

“But I will take half the responsibility for that because I could have looked it up too.”

The man, however, wasn’t worried about the kitchen closing because he had gone to a barbecue right before their date.

“So, the restaurant closes and he goes, ‘Do you want to go across the street for a drink?’ And I’m so hungry, I want a snack, so I said yes.

When the woman told the man that she had work in the morning so she had to head out, he told her he enjoyed the night with her.

“Then he leans in, licks the side of my face, and gives me the worst kiss ever to the point that I pull away.

Things took a turn for the worse when she woke up a few days later feeling sick.

“After avoiding it for two years and getting vaccinated and boosted, this man gave me COVID,” she deduced.

Two days later, it was Valentine’s Day and the man told Jess he was working on something for her.

“He sent me selfies. That was my Valentine’s gift: COVID and selfies.”

Viewers were horrified at the story.

“Bruh… after he was not him, that would have been a wrap for me,” one said about the inconsistent photo right before the date.

“Oh, the food thing was a tactic. I knew a guy who did the same thing so his dates felt uncomfortable ordering,” another suggested.

She was furious that this man, who she didn’t even like, may have given her COVID[/caption]