ENGLAND World Cup fans must cough up nearly £12 for LESS than a pint as pre-tournament promises proved a Doha desert mirage.

Qatar 2022 organisers had indicated that the country’s strict drink laws and sky-high prices would be relaxed for fans coming from across the world.

England fans risk being priced out of beer in Qatar[/caption]

While hotel bars were expected to be expensive, suggested prices for beer in the fan zones and at stadiums had been in the range of £7-£8 per pint.

But now official beer suppliers Budweiser – the only company allowed to sell alcohol in any official site at the World Cup – have unveiled the shock booze news.

In an advertising flyer posted by the American brewing giant, the price list makes clever that hopes of normal-priced beer for travelling fans have disappeared.

Urging fans to “Drink Wiser, Cheer Better, Hydrate Between Buds”, a half-litre of Budweiser – equal to seven eighths of a pint – will cost 50 Qatari Rials, or £11.61 at today’s exchange rate. 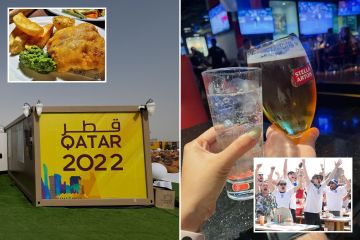 World Cup chiefs have wrestled with the demands from Fifa for drink to be available for fans with the customs of the Gulf State and the desire for supporters to stay under control and not booze to excess.

Budweiser stated that fans will be limited to a “maximum purchase of four Budweiser units per person.”

This is to prevent binge-buying and anyone must prove they are over 21 to be able to buy alcohol.

There has been signals that there might have been communication with both Fifa and the Qatari government before the final pricing policy was reached.

The company added: “Budweiser is proud to be served in compliance with the local rules and regulations by Fifa’s appointed concessionaire.”

Millennials Want Applying for Credit to Be ‘Subscription Simple’

Today24.pro
Crypto Lender Matrixport Raises Valuation to $1.5B Despite FTX Collapse I'm convinced Facebook Marketplace is Meta's best feature after I furnished my new apartment with used furniture ‘How many Uber drivers does it take to pick up a disabled person?’: Disabled person says 3 Uber drivers canceled on them because of their service dog Goldman issues stock market warning