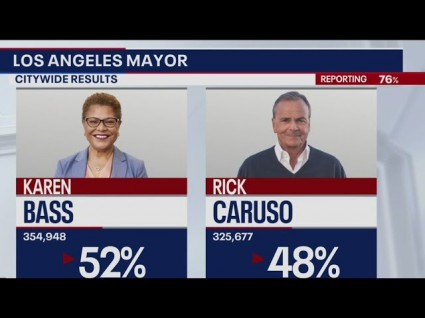 The most recent update in a heated mayoral race where homeless encampments were a major issue. via Politico:

Rep. Karen Bass is now more than four points ahead of billionaire Rick Caruso in the race for Los Angeles mayor, her widest lead yet as ballots continue to be counted in a contest that was the city’s most expensive ever.

Bass is now about 30,000 votes ahead of Caruso, according to the latest vote drop from LA County released Monday evening, which extended the congressmember’s previous lead by more than 20,000 votes.

[...] The LA mayor’s race has been the most expensive contest the city has ever seen, and among the most contentious. Bass, who got her start organizing in South LA before moving onto the state Legislature and later Congress, has the backing of the party establishment, including the White House and former President Barack Obama. Caruso, known for his luxury retail centers like the Grove, is a former Republican who only registered as a Democrat shortly before entering the race.

Today24.pro
I make $1,000 a month by promoting Amazon products on social media. It only takes 5 hours per week — here's how I set up my side hustle. RoboCV: stacker robot ‘How many Uber drivers does it take to pick up a disabled person?’: Disabled person says 3 Uber drivers canceled on them because of their service dog One of The Greatest Britons in History - Joe Calzaghe