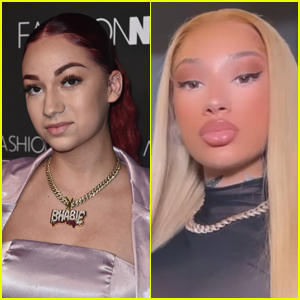 The 19-year-old rapper shared new videos of herself on social media, and her dramatic makeover is causing a lot of conversation – and some backlash, with accusations of Blackfishing floating around social media.

Fans pointed out that her new look on her Instagram Story on Sunday (November 13) seemed dramatically different from her usual appearance, having switched her hair to blonde, with many people discussing the appearance of her skin tone and lips.

Blackfishing is a term coined a few years ago describing non-Black public figures who have used makeup and/or visual effects and cosmetic surgery to appear Black or mixed race, and has been compared to doing Blackface. Other figures accused of doing this in the past include Iggy Azalea and Jesy Nelson.

After the videos went viral on social media, she responded to the backlash on her Instagram Story.

“Case closed!” she wrote with a screenshot of a text message exchange featuring a photo of the foundation she uses, as well as a second message: “Don’t yall ever ask me again why I don’t b on ig! I don’t make no money on here I don’t need to b on here I do it for my fans but y’all take it too far every time it’s honestly sad and weird,” she said.

Bhad Bhabie is one of many celebrities who are also on OnlyFans.

Stocks have entered a new bull market and the S&P 500 could soar 26% in the next 12 months, Leuthold Group's Jim Paulsen says

“Watch Out, You Bastards, Bolsonaro is President of Brazil!” – Charges Filed in Brazil for Arrest of Corrupt Socialist Supreme Court Justice