THE Game Awards recently announced all the nominations of games released this year for its 31 award categories.

There were more than a few surprises and snubs, with some big games missing out.

Elden Ring remains one of the year’s standout games.[/caption]

Voting is open now for all categories, so you can give a boost to your favourites from the year.

Here’s the full list of The Game Awards nominees, and who we think will win each category.

Game of the Year

We believe that Elden Ring, God of War Ragnarök, and Xenoblade Chronicles 3 would all be worthy winners of this award.

However, Xenoblade is unlikely to take the crown, and we think Elden Ring has a slight edge over Kratos. 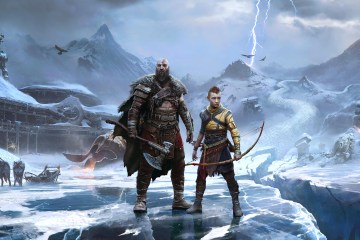 With its seemingly endless open world, we believe that Elden Ring had the best direction of the year, and we think the public and the jury will agree.

We all had our favourite stories from this year, but when it comes to the final vote, God of War Ragnarök will probably take it.

We absolutely adored the look of Stray, but don’t think the masses will agree. For its dark, fantasy world, Elden Ring will probably claim this one.

We love the music of both Metal: Hellsinger, and Xenoblade Chronicles 3. However, for sheer mass appeal the latter will probably win this one.

We continue on our Elden Ring fanfare, but not only believing it has the best sound design, but also by believing the public and the voting jury think so too.

There have been a lot of stunning performances this year, but Christopher Judge as Kratos is an all-time classic.

Endling: Extinction is Forever was our favourite of this group, but we think the award will go to As Dusk Falls.

Genshin Impact is a favourite around the office, but we think the prize might go to Apex Legends.

Everyone had their own personal favourite indie game this year, but we unanimously believe that Stray will walk away with this one.

Our main consensus here is that Diablo Immortal is a terrible game. We love Marvel Snap though, and think the judges will too.

If one game is known for its community, it’s Final Fantasy 14, long may it prosper.

For all the additions that it added compared to the original, we think The Last of Us Part 1, will win this one.

VR is still a luxury for many, but Moss Book 2, and the original, almost make it worth buying.

Neon White is one of our favourites this year, but we can’t stop playing Bayonetta 3.

While we are all big fans of the puzzles in Tunic, this is probably an easy win for triple-A God of War Ragnarök.

You may have noticed our team is split between its love of Elden Ring and Xenoblade Chronicles, but the former will probably take it.

We think Sifu was the best fighter of the year, but for sheer popularity, Multiversus will likely take this one.

Personally, we swooned over Kirby and the Forgotten Land, but think Splatoon 3 will win the popular vote.

With a long history of amazing strategy games, Total War: Warhammer 3 is both our favourite choice and the likely winner.

In our hearts, OlliOlli World will take this category by storm, but our brains know that it’ll be Gran Turismo 7.

Few multiplayer games were as enjoyable as Splatoon 3, but we saw more hype surrounding Multiversus.

Fans are mourning the loss of Nibellion from Twitter, and we think the public will vote for their return.

We think all of these games are deserving of the title, but as a Game of the Year contender, the winner has to be Stray.

We love Cyberpunk: Edgerunners and think fans do too, but Arcane could make stiff competition.

It’s been a long time in the making but there is no way that The Legend of Zelda: Tears of the Kingdom doesn’t walk away with this one.

For the sheer fun factor, we want Rocket League to win, but League of Legends is a far more likely candidate.

Faker is a fan favourite player who everyone gets behind, and the likely winner for this one.

FaZe Clan has completely taken this year by storm, and we’ll be surprised if they don’t win this.

B1ad3 has had strong results in a very hard year for his team and we think his win will reflect that.

This year was filled with bombastic events, and none were as big as Evo 2022.

Today24.pro
Five ways struggling families can get free cash to help pay for food this Christmas In the age of megachurches, communion has become a big business Best Android app 2022 – Google reveals top pick for the year and it’s totally free The Darkest Secret and Tragedy of Edwin Valero