IT’S no secret that the Hooters uniforms are supposed to be a bit revealing, but there’s an unsuspecting issue with the tops.

A 23-year-old Hooters employee demonstrated how difficult it was to take her waitressing shirt off in a recent video.

Several employees have previously exposed the restaurant franchise for its strict uniform requirements.

Between staff inspections and mandatory makeup rules, Hooters is very strategic in its employee presentation.

She posted a video attempting to take off her Hooters top, and the process is more complex than you would think. 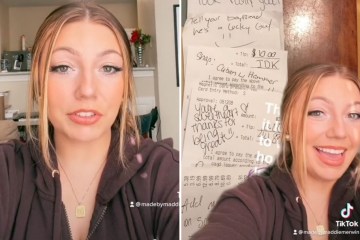 Lily steps away from the camera so viewers can see her entire outfit.

Her arms are crossed around the front of her body as she tries to pull the white shirt over her head.

“In case anyone was wondering how tight Hooters’ uniforms are,” she says.

“Here’s me at 1 am trying to be quiet while trying to somehow get out of my uniform with no help.”

Lily can barely get the top to fit over her chest.

She tries to pull it off, but the shirt gets stuck around her armpits.

Finally, after 52 seconds, the shirt comes off.

Viewers felt Lily’s pain as she struggled to rip the tight top off her body.

“I’m feeling claustrophobic, bestie,” one viewer said, while another commented: “I would be so frustrated I’d kick the wall, throw up, & cry.”

“They better be paying for shoulder replacement surgery,” one person added.

Today24.pro
One of The Greatest Britons in History - Joe Calzaghe ‘How many Uber drivers does it take to pick up a disabled person?’: Disabled person says 3 Uber drivers canceled on them because of their service dog I make $1,000 a month by promoting Amazon products on social media. It only takes 5 hours per week — here's how I set up my side hustle. Billionaire investor Howard Marks touts a bargain boom as interest-rate fears grip markets - and predicts a surge in companies going bankrupt