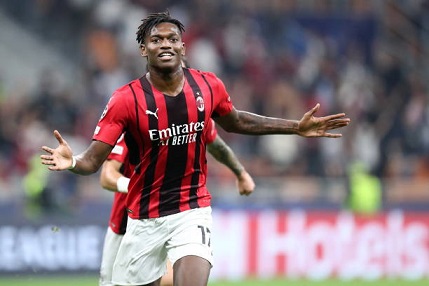 As the Portuguese World Cup squad gathered in Oeiras to prepare for the upcoming tournament in Qatar, several of the Seleção’s attacking players arrived off the back of positive showings for their clubs this weekend.

While much news coverage has centred on Cristiano Ronaldo, there were goals this weekend for Rafael Leão of AC Milan, who was celebrating his Serie A Player of the Month award, as well as André Silva in Germany and João Félix in Spain. Meanwhile elsewhere, there were goals for veteran forwards Bebé and Nélson Oliveira, as well as Portugal U21 international Dany Mota on another goal-laden weekend for Luso exports.

Rafael Leão was presented with the October edition of Serie A Player of the Month award ahead of AC Milan’s match with Fiorentina at San Siro on Sunday. The Portuguese followed up the recognition by putting his team ahead early on as the Rossoneri ran out 2-1 winners to keep in the chase of runaway leaders Napoli.

Former Sporting man Leão scored two goals and registered one assist during October in the Italian top flight, as well as putting in an impressive display in Milan’s victory over Juventus. As such, he was recognised with the league’s monthly accolade, and just two minutes into the clash with Fiorentina he burst in behind the visiting backline and beat goalkeeper Pietro Terracciano with a cool finish.

Antonin Barak equalised in the first half for Fiorentina but a 92nd-minute own goal by Nikola Milenkovic meant Milan head into the break on a winning the note. The points were vital for the defending champions in keeping within distance of the impressive leaders Napoli, who have an 8-point advantage at the top heading into the hiatus.

Rafael Leão signed off in style in Italy

Let’s see some of this at the World Cuppic.twitter.com/Bp3zZEw1pq

André Silva was the key player in RB Leipzig’s 2-1 victory over Werder Bremen in the Bundesliga on Saturday. The former Porto man scored the first goal and later provided the assist for the winner as Leipzig made it six wins in a row in all competitions.

Silva, who was named in Fernando Santos’ Portugal World Cup squad, endured a slow start to the season but recent weeks have brought an upturn in form. The match at Bremen’s Weserstadion was just 12 minutes old when the Portugal striker opened the scoring, receiving Emil Forsberg’s pass and finishing well with a low first-time shot.

Christian Gross equalised for Bremen in the second period but the visitors secured all three points twenty minutes from time through Xaver Schlager, who raced onto Silva’s neat touch to score the winner. Leipzig moved into 3rd place with the victory, six points adrift of Bayern Munich.

João Félix has enjoyed much increased goal output in recent weeks and the forward signed off for Atletico Madrid ahead of the World Cup with another in the Spanish Copa del Rey. Atletico progressed past lower-division side Almazan 2-0 on Saturday, with Félix getting the second goal.

Félix’s goal was a typically classy piece of play, as he exchanged passes with Rodrigo de Paulo before showing nice footwork to move the ball onto his left foot and finish. (highlights here)

Another Madrid-based Portuguese forward, Bebé, also scored this weekend in the Copa del Rey. The former Manchester United and Benfica man produced a stunning free-kick to give Rayo Vallecano the lead on the way to a 3-1 win away against Mollerussa.

Also 1st round of the competition, Atletico Madrid-owned former Portugal U20 international Marcos Paulo helped Mirandes past Vimenor. Second-tier Mirandes ran out 2-0 winners and Marcos Paulo, who was born and raised in Brazil, got the second in the first half with a side-foot finish for Joseba Etxeberria’s side.

Dany Mota put in a star showing for Serie A new-boys Monza in a 3-0 win over Salernitana in Italy. Former Portugal U21 forward’s backheel set up the opener for Carlos Augusto, before Mota himself doubled the home side’s advantage going into the break to give Monza back-to-back home wins and move them up to 14th in the table.

Mota’s 12 goals in Serie B last season were a major influence on Monza achieving promotion for the first time in their history. The 24-year-old has been part of a squad rotation so far this season and has contributed two goals in the top flight for the Lombardy outfit.

Experienced Portugal international striker Nélson Oliveira is making strong progress in Greece this season after a long spell on the sidelines with injury. Oliveira missed the vast majority of last season following an ACL tear at the beginning of the campaign, and the 31-year-old took several months to build up his fitness between his return in April and the start of the current term.

Now the former Benfica striker has rediscovered his goalscoring touch, which continued at the weekend with the opening goal from the penalty spot as PAOK defeated Volos 3-0 at home. Oliveira now has five goals for the season and scored 3 in his last 5 outings for PAOK, who moved up to 3rd place with a third straight win. Also in the Super League, João Pedro scored for Panaitolikos in a 3-1 win at Lamia.

In the Netherlands, Pedro Marques was one of the star players on the last matchday the Eredivisie before the World Cup. The midfielder struck twice for NEC in a 6-1 win over RKC Waalwijk, making it three goals for Marques since his summer arrival from Famalicão. In the English National League, Rúben Rodrigues scored to help Notts County to a 2-0 win at Eastleigh which takes them back to the top of the standings.

Marco Paixão continues to be a prolific force in the Turkish 1 Lig and his penalty in Altay’s 2-0 win at Altinordu was his 6th goal in his last 5 matches in the second tier. In neighbouring Armenia, Hugo Firmino scored the opening goal for Ararat-Armenia in a 2-1 win at Noah, notching his 9th league goal of the season.

Former Portimonense striker Aylton Boa Morte scored twice for Khorfakkan in the UAE Premier League as they won a thrilling encounter 4-3 against Al Dhafra. In the same league, José Novais grabbed the winner as Al Bataeh overcame Dibba Al Fujairah 1-0 away from home.

In Luxembourg, there were goals for João Simões, scorer of the winner for Differdange (2-1) against Wiltz, as well as António Gomes who scored twice in Petange’s 4-1 win over Hostert. Finally, ex-Armacenenses midfielder Aires Sousa scored his first goal of the season in Albania for Bylis, but could not prevent his side losing 2-1 to Partizani Tirana, while Gonçalo Paulino’s penalty in Andorra as UE Santa Coloma won 2-1 against Engordany.

What makes China’s wave of protests different this time

‘Give the gift of hope’: Richmond unveils Christmas fundraising campaign

Today24.pro
I make $1,000 a month by promoting Amazon products on social media. It only takes 5 hours per week — here's how I set up my side hustle. Crypto Lender Matrixport Raises Valuation to $1.5B Despite FTX Collapse ‘How many Uber drivers does it take to pick up a disabled person?’: Disabled person says 3 Uber drivers canceled on them because of their service dog One of The Greatest Britons in History - Joe Calzaghe