The ex-Pompey striker, who made 401 appearances for South Coast sides Bournemouth and Portsmouth scoring a total of 144 across both clubs, has 28 in just 18 league and cup starts in 2022/23.

Pitman has netted 14 goals in his last six appearances for the Royals.

An astonishing 22 of his 28 goals have come in just 14 league games.

Pitman has scored FIVE goals more than Man City goal machine Haaland, who has 23 across all competitions. 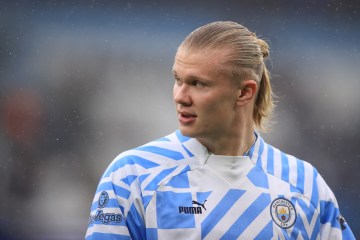 Lopjolt is followed by Ryan Harkin and Taylor Rhiney, who have both hit 24 goals respectively for Highgate and Biggleswade United.

Although, should City and Haaland accept seventh tier Ashton United’s cheeky loan bid for the Norway ace, Pitman’s lead to evaporate rather quickly.

Haaland isn’t going to the World Cup and has over a month to kill before the Premier League resumes.

The Robins confirmed the offer in a club statement that reads: “Ashton United can confirm that the club has submitted a 28-day loan approach for Manchester City striker Erling Haaland.

“With the current Premier League champions not in action until late December due to the 2022 FIFA World Cup.

“The Robins have reached out to our neighbours at the Ethiad in order to keep Haaland’s match fitness with him not being involved in Qatar.”

‘No tip, no trip’: DoorDasher shows piles of orders sitting on restaurant counter, says its a result of non-tipping customers

Princess Diana dress sells at auction for over $600k

Hi-Fi Rush Feels Like A Passion Project, And That’s Because It Is