The actress, 35, paired a darker corset with pale blue denim jeans for a stylish contrast as she perched on the side of a motorised buggy.

She rested one hand against her face and her other arm dangled between her legs on a night out in the Middle East.

The look was a hit with her in-laws. 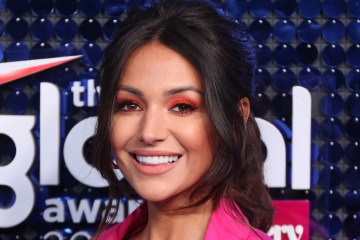 Attractive pair Mark and Michelle have been making the most of the Dubai heat by basking in the sunshine at high-end beach resorts with cocktails in hand.

The often private pair have treated fans to a number of selfies on the trip.

Michelle showed off her gym-honed abs in a tan bandeau bikini top and sarong as she snapped herself in a mirror.

Back outside on a sun lounger she and Mark cosied up together and made the most of the sunset glow.

They enjoyed a feast of delicious food at beachside hotspot Twiggy by La Cantine including grilled octopus and finely-sliced truffle.

Located at the five-star Park Hyatt Dubai Lagoon, the venue boasts a 100 metre long infinity pool and dubs itself the best beach resort in the city.

Mark and Michelle moved into their mega-mansion, which is estimated to now be worth £3.5million, in October.

The jaw-dropping pad was years in the making and designed to their exact requirements.

It contains a bar, mini nightclub with DJ booth and a spa – and is surrounded by Wimbledon-style lawns.

There’s also an epic driveway and a home gym for the fitness-obsessed couple to work out in.

Plus, the rear of the property has an epic swimming pool to cool off in when it’s hot.

Each of the property’s five bedrooms has its own en-suite bathroom, while three of them even have dressing rooms.

Mark also recently shared footage of their stunning his and hers marble bathroom containing its own sauna.

The couple bought their home for £1.3million in 2020 but razed the former property to the ground and started again from scratch.

Reference in 'Simpsons' to labor camps torpedoed in Hong Kong

For Me – Richard Keys Concerned About Crystal Palace