IT’S been just six days since Matt Hancock entered the I’m A Celebrity jungle and he’s gone from meekly defending his Covid conduct to camp leader.

But is the former Health Secretary merely playing politics?

Campmates including Charlene made their feelings clear at the start[/caption]

Body language expert Judi James tells The Sun that Matt’s behaviour on the show so far points to a clear strategy to get campmates – and viewers – on his side.

And she says the campmates have unwittingly unleashed a monster.

“People like Charlene White, Scarlette Douglas, Boy George, Chris Moyles and Sue Cleaver made their feelings known about Matt when he arrived to join their group,” says Judi.

“But Matt acted the wounded puppy, using body language techniques like head and torso-lowering and tearfulness to signal submission and humility.

ON I'M A CELEB 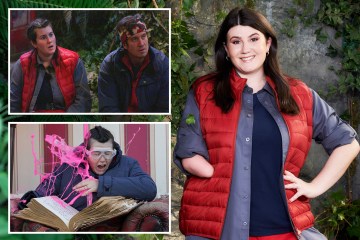 We flouted rules on I'm A Celeb until I was caught, but it was never shown on TV

“His line about wanting forgiveness placed the power firmly in the campmates’ hands and they chose to act magnanimous and accept him into the group.

“In an emotional horror show though, they suddenly saw themselves become bit part players in The Matt Show.

“Matt is getting all the air time, and he is the one responsible for all their food, making them genuinely dependent on him.

“He is their leader now and sits on the comfy chair and sleeps in a comfy bed while they all perform the tasks they have been given by him.”

Here Judi reveals five signs Matt is playing the crowd – and the secret signals that his campmates are not as keen on him as they appear.

There are cues and clues to suggest this man could be playing everyone like a fiddle.

Number one, his humility rituals have vanished.

The moment he sat on that ‘throne’ chair, he began to pit-bare, tucking his hands behind his head to bare his armpits in a gesture of dominance.

When he came back after the last trial he was no longer being modest. Instead, he made the others watch as he lay down to act out what happened and to be the heroic centre of attention.

His laughter rituals involve an exaggerated throwing back of the head, a wide opening of the mouth and slow seal-clapping, but these gestures together rarely signal genuine happiness or fun.

Matt’s smiles and laughter rituals tend to be confined to the mouth. Often his eyes seem to be busy scanning to judge others’ reactions as he ‘laughs’.

Matt’s more genuine-looking smiles as he is voted for each trial suggest he sees this as a measure of popularity, and being voted as leader will seem to have confirmed that all his dreams have come true in terms of a turn-around in the eyes of the public.

When he was told he hadn’t been chosen for the next task his reaction looked out of place.

Before he performed an open mouth, arms in the air ritual of celebration his nose curled in a telling micro-gesture of disgust.

As a politician, Matt must have smelt a series win is possible.

With boredom and tiredness kicking in, the campmates are now having to dig deep to hang on to the likeable side of their personalities to survive.

And with Matt as their new leader, that means outbreaks of masking, devious behaviours and fake responses.

We’re seeing two-faced responses from many of them and mimed signals of leadership challenge from others.

The whole group have suddenly increased their masking rituals to hide their true feelings from both the viewers and from the other camp mates.

Fake laughs are becoming overkill, incongruent rituals rather than signs of genuine fun, and Boy George is back on his recruitment drive to start the rebellion he began before Matt walked into camp.

We’re also getting more examples of status-boosting body language, like splaying and pit-baring, and fighting for air time via name-dropping and some rather suspiciously tall tales that are aimed at grabbing a few headlines.

Boy George is heading up a rebellion[/caption]

Boy George is setting himself up as the leader of the rebellion against Matt and is busy recruiting others, like he recruited against Charlene in the early days of camp.

He even felt confident enough to target Mike Tindall, who is the deposed leader.

To Matt’s face though, George tends to look friendly and positive.

He was the one leading Matt’s very fond farewell for the last trial – but also the one using over-dramatising techniques after Matt asked for the potatoes to be cleaned, using words like “feisty”, “kicking off”, “he’s loving this little bit of power” and “the worm’s going to turn”.

Chris is the one using the most complex masking and contradictory communication techniques that even he is struggling with.

He was anti-Matt, but last night Matt cleverly went into chat-show host mode to flatter Chris and allow him to offload about losing his Radio 1 job.

Chris then back-peddled like crazy to the viewers, sitting in the hut offering the “sick note” excuse for sucking up to Matt by deciding there are actually two Matts, getting himself off the hook by befriending “Matt the campmate” rather than Matt the ex Health Minister.

Clearly worried this wasn’t enough to absolve himself, Chris performed a huge denial gesture after he spoke.

He paused after saying campmate Matt is “doing alright”, then looked into the camera, snarled and shook his head.

These contradictory signals will allow Chris to think he’s somehow sticking to his principles about Matt even after their intimate conversation.

Charlene and Sue ‘console’ each other over Matt’s leadership[/caption]

Sue and Charlene are struggling the most over Matt’s sudden popularity – and possibly making themselves vulnerable in terms of public popularity in the process.

Both converted to nurturing, parental mode when Matt asked for some forgiveness and they were the most influential in terms of getting Matt accepted by the group.

Now he’s leader and air-time grabber though, they are both looking emotionally drained as a result, which could turn to resentment.

Charlene is Matt’s deputy and was supposed to be RV-sharing with him.

It’s questionable whether her refusal to share is down to spiders or concerns about hypocrisy.

Sue has resorted to sarcasm as her weapon, but these two were sitting using stroking gestures to calm each other down and console each other in what is an impossible situation for them as they try to second-guess the public’s reaction to Matt.

Today24.pro
One of The Greatest Britons in History - Joe Calzaghe RoboCV: stacker robot Billionaire investor Howard Marks touts a bargain boom as interest-rate fears grip markets - and predicts a surge in companies going bankrupt ‘How many Uber drivers does it take to pick up a disabled person?’: Disabled person says 3 Uber drivers canceled on them because of their service dog