A TINY foil patch could cure the curse of sweating for good, experts have claimed.

Researchers in the US have trialled the gadget, which heats up when it comes into contact with sweat.

It then temporarily disables the sweat glands, to stop excessive perspiration.

Sweating is completely natural, it’s our body’s way of cooling us down.

The NHS says that excessive sweating, also known as hyperhidrosis is common and can affect the whole body, or just certain areas.

At present, remedies for this include stronger deodorants, sweat shields or foot powders for sweaty feet. 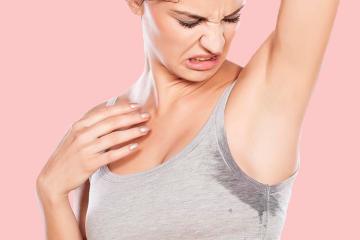 Other treatments can include having Botox injected into the problem areas.

This works by blocking the nerve signals from the brain to the sweat glands – but these often need to be repeated on a regular basis.

But the trial conducted by Candesant Biomedical found the new patches could benefit 80 per cent of people with the condition – raising hopes that excessive sweating could be banished for good.

The study was a small trial of just 16 people, and 83 per cent using the patch said their sweat levels reduced to mild or not noticeable after six weeks.

Warning to anyone who takes paracetamol over 'bizarre side effect'

Writing in the journal Dermatologic Surgery, the experts detailed the use of the ‘novel device’.

The patches are single use and can be taken on and off when needed, they explained.

They are made from metal foil which stops the eccrine glands working.

Patients used the patches for three minutes and while in place, they felt a mild warming discomfort.

The trial attendees that used a placebo patch saw no change in their condition.

Adults who participated were monitored weekly for six weeks after their initial treatment.

The researchers said: “The patch offers a novel, convenient and well-tolerated therapy for patients with axillary hyperhidrosis.”

What can I do about sweating?

Guidance from the NHS states that it's normal to sweat if you get hot or exercise.

Experts explain that you may be sweating excessively if you’re sweating when your body does not need to cool down.

Official advise states: “Excessive sweating can happen for no obvious reason, because of another condition you may have or as a side effect of a medicine you’re taking.”

In order to help with excessive sweating, the NHS says you can do the following:

You should avoid wearing tight clothes and don’t do things that might make your sweating worse such as drinking alcohol or eating spicy food, guidance states.

They added that the patients’ quality of life also improved following the treatment.

While this was a small scale trial, the medics are currently hosting eight others with 120 patients across the US.

Previous trials in the US have looked at the use of single application patches along with the use of roll on deodorants.

However a set of completed results was never posted from the ‘Sahara Study’ in 2020 which intended to evaluate the effectiveness of the N-SWEAT Patch for use in subjects with excessive sweating.

Another trial, conducted in 2017 in Florida and Illinois looked at sweat patches and how they could be used to monitor perspiration during exercise.

Other studies have successfully used sweat patches in order to test participants for drug use.

In 2004, researchers at National Development and Research Institutes in New York found that such patches could detect the use of cocaine.

Later, in 2007, a study penned by experts at Yale University School of Medicine found that similar patches could also monitor opiate use in patients.

Mike Ashley’s war-like tactics usually get him what he wants… can Coventry rise from the ashes of this latest saga?