CANELO ALVAREZ expects to make his boxing return in May after successful hand surgery and will do so seeking revenge.

The Mexican superstar went under the knife for a left hand injury which has plagued him since last year.

Canelo Alvarez expects to make his boxing return in May[/caption]

Canelo, 32, beat Genaddy Golovkin, 40, on points in their trilogy bout in September and faced being out for a year.

But now, the four-division champion could be back by May and has called out Dmitry Bivol, 31.

“I lost trying to make history in another division, complicated, for me, it is number one in the 175-pound division. 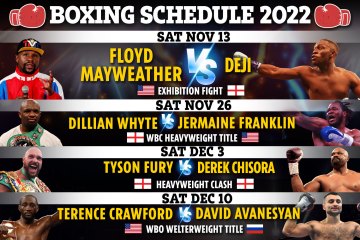 PUNCH IT IN YOUR DIARY

“I think I’ll be ready for May again. I am here to face the best and have the best fights in boxing; all those fights interest me; whatever leads me to make history, that’s why I’m here.”

Canelo was beaten on points by Bivol in May, failing in his WBA light-heavyweight title challenge.

The Russian has since beat Gilberto Ramirez, 31, and insisted a unification title clash with Artur Beterbiev, 37, was his main goal.

Hearn said: “It’s pretty obvious that Dmitry Bivol is about legacy and about belts. And he wants to become undisputed.

“That is his absolute main focus. Obviously from my side we want to make the biggest fights possible.

“The Canelo Alvarez rematch is a very big fight. But the priority for Dmitry is to be undisputed.”

5 freed from Hindalaga jail on R-Day