PREGNANT Molly-Mae Hague has kept quiet on potential baby names for her tot with Tommy Fury – until now.

The Filter tan brand founder, 23, is seven months into her maternity journey with boxer Tommy, also 23, with the pair recently revealing they are expecting a baby girl.

Molly has insisted the duo had had their little girl’s moniker nailed down since their time in the Love Island villa.

Yet she has warned her fans they will either “love it or hate it” as she told how it was an “unique” and “unusual” baby name.

Fans have been convinced they will call their little girl “Cloud” – after YouTuber Molly’s recent use of the weather Emoji.

Yet after Tommy’s successful boxing bout at the weekend, the star let slip more than usual with regards to their choice, should their firstborn have been a boy. 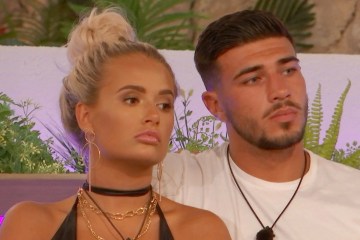 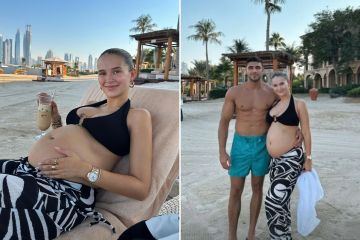 Inside Molly-Mae’s glamorous Dubai babymoon at £1,000 a night hotel

An interviewer from iFL TV asked her if they had a name for their tot, to which Molly replied: “We do. We haven’t mentioned the name.”

He teased: Give us the first letter of the name,” to which she giggled and said: “No, I can’t do that because there’s so much speculation about what this flipping name is.

“If I give the first letter then everyone will know, so …”

Hedging his bets, the interviewer asked: “Molly Junior?” to which she laughed: “No it’s not Molly Junior.

“But, if it was a boy, there was conversations of it being Tommy Junior.

“He would have loved that!”

The media personality said she and Tommy both have their heart set on the unknown name, with Molly admitting she’s never come across anyone with this name.

“It’s always been a dream baby girl name and luckily when I met Tommy and I told him the name I’ve always dreamt of using, he absolutely loved it too.

“It’s a really really unusual and a different name, I do not know anybody else with the name.”

Earlier this year, Molly showed off her blossoming baby bump as she announced her pregnancy.

She wrote under an emotional black and white video clip: “I can’t wait for the adventures that we haven’t even dreamed of yet.”

The emotional clip starts off with Molly-Mae reading out the loving quote from when she was in the Love Island final with Tommy.

The loved-up couple have gone from strength to strength since appearing on the ITV2 dating show and recently moved into their dream home.

They have both made no secret about wanting to start a family together and recently, Molly admitted she didn’t mind about getting married first.

They then revealed they knew the sex of their tot as they were seen popping a gender reveal balloon in their YouTube video to accompany the baby girl news.

The Love Island couple are expecting a little girl[/caption] YouTube star Molly revealed their tot could have been called Tommy Junior if it had been a little boy[/caption] Molly spoke after Tommy’s successful boxing bout at the weekend, when he wore ‘baby girl’ emblazoned shorts[/caption]

Who are Saudi Arabian team Al Nassr? All you need to know about side Cristiano Ronaldo could join

Why Kylian Mbappe Isn’t in France’s Starting XI vs. Tunisia

Today24.pro
One of The Greatest Britons in History - Joe Calzaghe Billionaire investor Howard Marks touts a bargain boom as interest-rate fears grip markets - and predicts a surge in companies going bankrupt RoboCV: stacker robot I make $1,000 a month by promoting Amazon products on social media. It only takes 5 hours per week — here's how I set up my side hustle.