LEWIS HAMILTON has revealed that he rarely drives on normal roads outside of F1 circuits as he finds it too stressful.

The seven-time World Champion, 37, has made tearing round tracks and overtaking rivals at nearly 200mph look easy in his long career.

He is among the most experienced drivers on the current grid – and has the record to back up his skills.

But the Brit made the ironic confession that while the high-speed, twisting roads of Silverstone during a Grand Prix weekend do not scare him, normal roads do.

Hamilton admitted to Vanity Fair that the experience of driving in a normal road car left him feeling under too much pressure.

He said: “I just think I find it stressful. I try not to do things that don’t add to my life.” 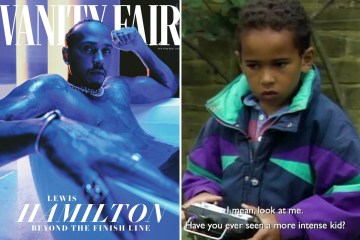 Driving around the south of France during his interview, he added to the magazine: “This is now stressful for me. This road is crazy. So much going on here.

“I’m going to turn around in a second. Look, we’re on these roads, anything can happen.

“People say: ‘Dude! You drive around at 200 miles an hour!’ And I’m like, in terms of fear factor, that’s easy for me. I guess we’re just all wired differently.”

Despite his road concern, Hamilton is still known to be a big collector of different vehicles and has in his collection Ferrari LaFerrari, a McLaren P1 and an MV Agusta bike.

As he tries to become more environmentally conscious, the star will now mostly only drive his electric Mercedes EQC.

The 37-year-old also revealed it was not just normal driving which unsettled him, and revealed his long-term fear of spiders.

He currently sits fifth in the rankings after failing to win a single race.

And Hamilton’s hopes of ending his duck at the Brazilian GP were hit when teammate George Russell beat him to the chequered flag by just over 1.5 seconds.

Today24.pro
I'm convinced Facebook Marketplace is Meta's best feature after I furnished my new apartment with used furniture ‘How many Uber drivers does it take to pick up a disabled person?’: Disabled person says 3 Uber drivers canceled on them because of their service dog Crypto Lender Matrixport Raises Valuation to $1.5B Despite FTX Collapse Goldman issues stock market warning