TYSON FURY has opened the door to sensationally fighting Deontay Wilder again – on just one condition.

The heavyweight pair drew in 2018 setting up a rematch two years later, which Fury won by seventh-round stoppage.

They saved the best till last in their trilogy classic in 2021, which included FIVE total knockdowns.

Fury, who was floored twice himself in round four, dropped Wilder three times on the way to a knockout in the 11th.

But an “amazing” fourth fight could be on the way with Wilder, 37, ordered to face Andy Ruiz Jr, 33, in a WBC final eliminator.

Although Fury will only share the ring with his American rival if he travels to the UK. 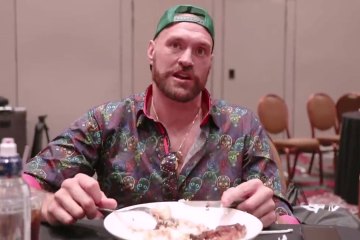 “I’ve been over there three times, if he wants the fourth fight, he’s gotta come to England. Do that at Wembley, break all records again.”

Fury defends his belt on December 3 against Derek Chisora – the man he has twice beaten in one-sided fashion.

Their unexpected trilogy came after proposed super-fights with Oleksandr Usyk, 35, and Anthony Joshua, 33, broke down.

And Fury – who only announced his boxing retirement in April – admitted he is lacking motivation ahead of his return.

He told Carl Frampton: I’m boxing today for no reasons, for no gain, for no goals.

“So it’s like I’m treading water and until I meet someone who’s very hungry, who’s not treading water and doing it because they need to put food in their kids’ stomach and pay their bills, then that day is going to be a say day for me, isn’t it.

“So, my heart is not in boxing, but I have nothing else. Without boxing I am nothing.

“Even though I’m a multi-millionaire and a family man, great, that’s all aside.

“But my passion and my love affair has been with boxing from a child and I can’t let it go.

“I am here today to say I am a very, very, very selfish person, because I should have walked away in April when I said I was going to walk away.

“And I’m back for more punishment, an idiot really, but what can we do?”

Student councils endorse Nemenzo as next UP president

Today24.pro
The Darkest Secret and Tragedy of Edwin Valero Sam Bankman-Fried could face extradition from the Bahamas to the US: Here's how, legal experts explain Anthony Joshua returns to America in search of new coach ahead of boxing return and links up with trainer Virgil Hunter Marin commercial property sales sapped by interest rate hikes