CRISTIANO Ronaldo has accused Gary Neville of criticising him to get more fame — and declared the TV pundit is no friend of his.

The Portuguese superstar blasted his former Man United team-mate in an explosive Talk TV interview with Piers Morgan, saying: “We’re not ever having dinner together.”

Ronaldo blanked Neville live on TV at the end of last month — ignoring the ex-Red Devils skipper while warming up ahead of a game against West Ham.

The fixture came days after Ronaldo was left out of the squad to play Chelsea because he refused to come on as a substitute against Spurs.

After the Chelsea game, Neville — who shared a dressing room with Ronaldo for seven years — said: “We know him, we love him but he can’t accept not being the star man. He’s going to have to leave, that’s it.” 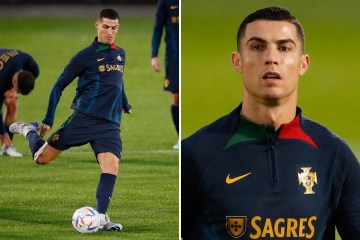 When asked if Neville had used his name to get attention, he responded: “I think they take advantage of that because they are not stupid.

“I’m the number one followed guy in the world. It’s not by coincidence.”

Neville was mocked in a tweet by fellow Sky Sports colleague Jamie Carragher after Ronaldo ignored him but greeted other pundits Louis Saha and Jamie Redknapp at Old Trafford.

Ronaldo, 37, has also singled out another ex-United teammate Wayne Rooney for frequent negative comments about him since his return to Old Trafford last September.

He admitted he was “surprised” by Rooney’s criticism since he rejoined United last September — despite Wayne and his kids enjoying play dates with Ronaldo’s kids at his home.

Ronaldo said: “It was one year ago, or six months ago. We’re here in my house, he picked up his kids here and he invited (12-year-old son) Cristiano to go to his house to play football.

“I really don’t understand people like that. Or if they want to be on a cover of the paper in the news or they want new jobs or whatever.”

Watch ‘Piers Morgan Uncensored: 90 Minutes with Ronaldo’, 8pm on Wednesday and Thursday on TalkTV. Find TalkTV on Sky 526, Virgin Media 606, Freeview 237, Freesat 217 and Sky Glass 508, live and on demand on the TalkTV app, streaming services and at TalkTV.

DC United boss Rooney had also had a dig at him for refusing to go on as a sub for United manager Erik ten Hag during the Premier League clash against Spurs.

Rooney told TalkSport: “Cristiano should get his head down and work and be ready to play when the manager needs you. I think if he does that, he’ll be an asset. If he doesn’t, I think it’ll become an unwanted distraction.”

When asked if he counts Rooney and Neville among his friends, the striker responded: “They are not my friends, they are colleagues. We play together, they’re not coming, we’re not ever having dinner together.”

The wantaway former favourite also blasted United’s controversial US owners the Glazer family, saying “They don’t care about the club.”

He said they had turned United from a football club into a “marketing club”.

But Ronaldo insisted he remained on good terms with former teammates Rio Ferdinand and Roy Keane.

He praised Keane as “my best captain ever” and his friendship with Ferdinand existed on and off the pitch as they were neighbours.

Calling them “very good guys”, he added: “Not just because they speak good about me, but they was there in the dressing room.

“They are football players. They know how players think and behave.”

Today24.pro
Why the power grid is an 'attractive target' for domestic terrorists: report Hans Niemann in the sole lead at the 3rd El Llobregat Open The Darkest Secret and Tragedy of Edwin Valero Anthony Joshua returns to America in search of new coach ahead of boxing return and links up with trainer Virgil Hunter