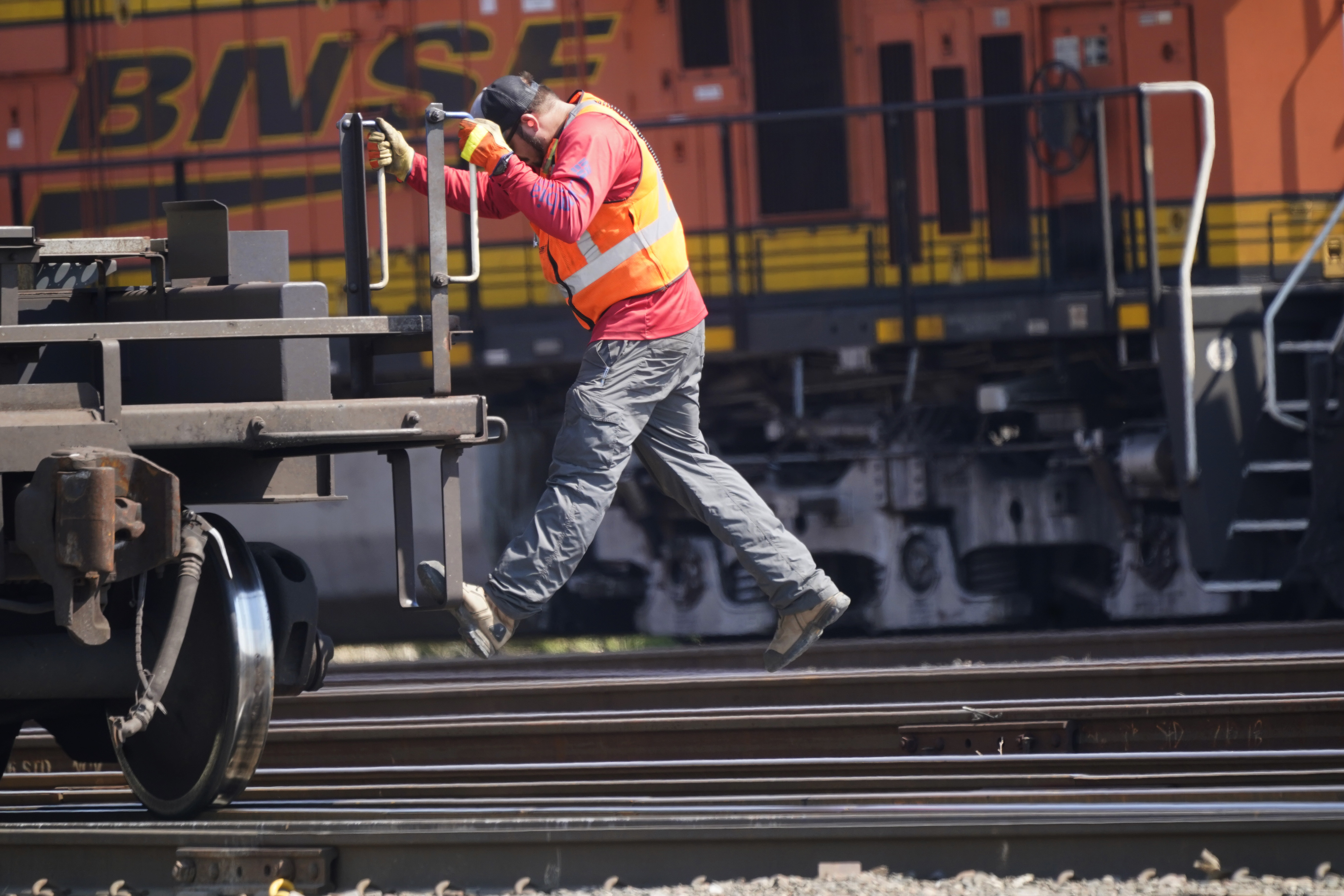 More than half of freight rail workers will vote on proposed contracts next week amid a highly organized effort by some of their colleagues to urge a “no” vote.

It’s the biggest test yet of the Biden administration’s push to avert an economically crippling rail strike after it helped a dozen unions broker a compromise with freight carriers in September. A rebel group, Railroad Workers United, is stoking opposition among members who believe the compromise green-lit by union leaders doesn’t go far enough to address working conditions that have led to severe attrition at the nation’s largest carriers.

So far, seven smaller unions have voted to approve their tentative agreements, while three have voted against — one as recently as Monday.

“There's a sense of hopelessness amongst a number of working railroaders,” said one of RWU’s leaders, Ron Kaminkow, who is a member of one of the unions voting next week. “The goal of our campaign is to basically empower people to just vote 'no' if they actually believe that this thing is not good. Don't be conned into voting for something that you really don't want.”

If unions don't get members on board by the end of an industry-wide cooling-off period Dec. 9, just one could spark a strike that capsizes the nation’s supply chain — stripping store shelves, starving livestock and compromising drinking water. At that point, Congress could be forced to step in and extend the cooling-off period, during which workers are barred from walking off the job — or impose the employer-championed recommendations of a presidentially appointed emergency board.

The presidents of the industry’s two largest unions — Sheet Metal, Air, Rail and Transportation Workers-Transportation Division and the Brotherhood of Locomotive Engineers and Trainmen — are criss-crossing the U.S. to buoy support for the proposed contracts before their members' votes are tallied Monday. They say they’ve gotten them the best deal possible.

“My message is, ‘Guys, we went all the way to the championship. We never backed down,’” SMART-TD President Jeremy Ferguson said from his car recently on the way to yet another event in Boone, Iowa.

But the RWU’s message is resonating with burnt-out freight rail employees frustrated by what they consider employers’ punitive attendance policies, among other things, and critical of the compromises accepted by their union presidents.

RWU is “just trying to get the unions to put the full interest of the membership ahead of everything else,” said one railroad worker, who is not associated with RWU and spoke anonymously to avoid retaliation from their employer. “I can definitely see interest in their message grow significantly.”

One union official called the situation “out of control.”

“There's going to be lessons learned going into the next round of bargaining about how we … control the narrative a little bit better — and I don't mean that in the propaganda way, I mean making sure that people have the facts,” said Greg Regan, president of the AFL-CIO’s Transportation Trades Department. “This was, for all intents and purposes, the first major national bargaining round in which social media reached this place it is right now.”


Since launching its campaign last month, RWU has held virtual events, solicited support from other organizations, and even peddled merch. A recent town hall drew nearly 500 RSVPs on Eventbrite as well as about $4,000 in donations, according to RWU — and, as of last Thursday, around 1,800 views on YouTube.

Union leaders, meanwhile, have been just as active. SMART-TD’s Ferguson has gone on podcasts, sent letters, participated in conference calls and attended town halls across the country alongside BLET President Dennis Pierce.

Face-to-face with workers, “I can tell right away who the ‘no’ votes are” and start “explaining how it works,” Ferguson said. “‘We're at the end. This is it. We're out of runway, guys.’”

Part of the effort is just explaining the negotiating process, said BLET Vice President Vince Verna — and the few options left to unions.

“It reminds me of those signs in the mall that say, ‘You are here,’” Verna said. “That's been part of this whole thing with our members — saying ’Here, ‘we're at this point in the process, and we're at the very last stages of the process.’”

As it stands, union officials are unsure of which way the rank-and-file will vote.

Workers’ decision to strike could cause Congress to step in and lengthen the cooling-off period — or impose the employer-endorsed recommendations of a presidentially appointed emergency board.

“We're gonna get what [workers] ratify, or we're gonna go back and forth to Congress — and God knows what's going to come out of this,” Ferguson said.

Either way, AFL-CIO’s Regan said, the proposed contracts aren’t the end of the line for rail workers.

“We are going to need to have major reforms to the industry, period,” he said, noting that those reforms go well beyond what can be negotiated in a labor contract. “All those quality-of-life issues are directly tied to the fact that [carriers] have cut their workforce to the bone.”

So far, RWU has steered clear of endorsing or advocating for specific contract language — earning them criticism from union officials.

“There are factions out there on social media … actively campaigning against this thing, with no thought on the merit,” Jared Cassity, SMART-TD’s alternative national legislative director, said. “It sucks. It sucks.”

RWU’s leaders maintain that there are too many disparate interests at play to weigh in on particular proposals.

”Each craft is going to be very different in their demands,” another RWU leader, Ross Grooters, said. The group “isn't going to represent every specific demand for each craft; that's up to us as workers to bring forward and push up.”

Tanya Snyder contributed to this report.

Discover card not working? Here's what we know

Eagles Coach Asked If Super Bowl Is a ‘Must-Win’ Game