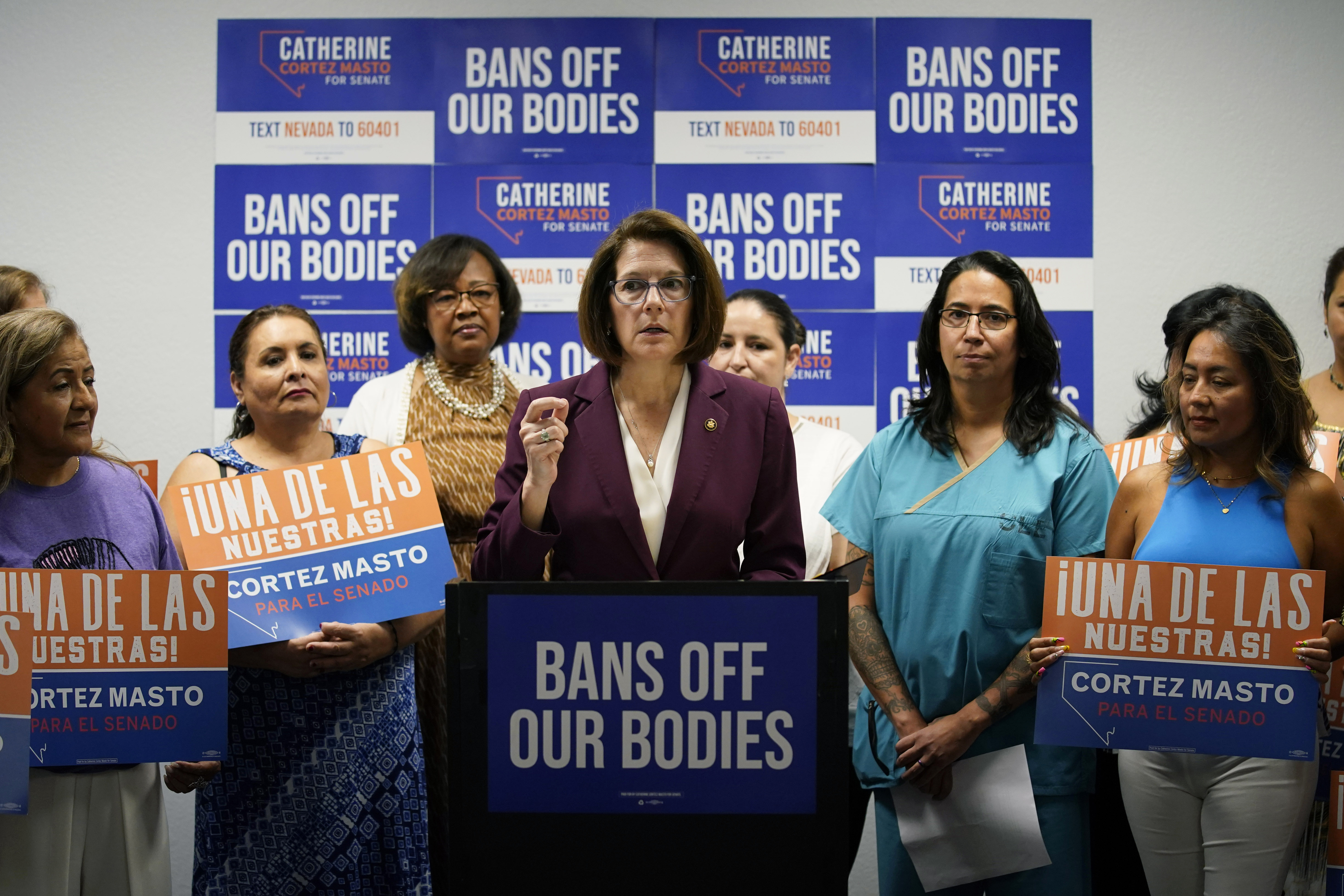 While other Democrats second-guessed their abortion-focused message in the waning days of the midterms, Catherine Cortez Masto bet big on it and won. Whether that vindication energizes her party on the issue is another matter.

The Nevada senator’s victory over Adam Laxalt handed her party another critical two years in the majority, of course. And Democrats see it as proof that it was a winning strategy to turn the reversal of Roe v. Wade into a campaign-defining theme, seeking to paint Republicans as extreme while the GOP focused on inflation and crime.

But winning on the message doesn't always translate into winning on the Hill. With Republicans favored to win the House and a maximum possible Senate majority of 51 seats in the next Congress, it'll be nearly impossible for Democrats to change upper-chamber rules in order to reinstate Roe.

Even President Joe Biden acknowledged the legislative reality for abortion rights advocates. Asked on Monday what voters can expect on abortion, he said: “I don’t think they can expect much of anything, other than we're going to maintain our positions.” 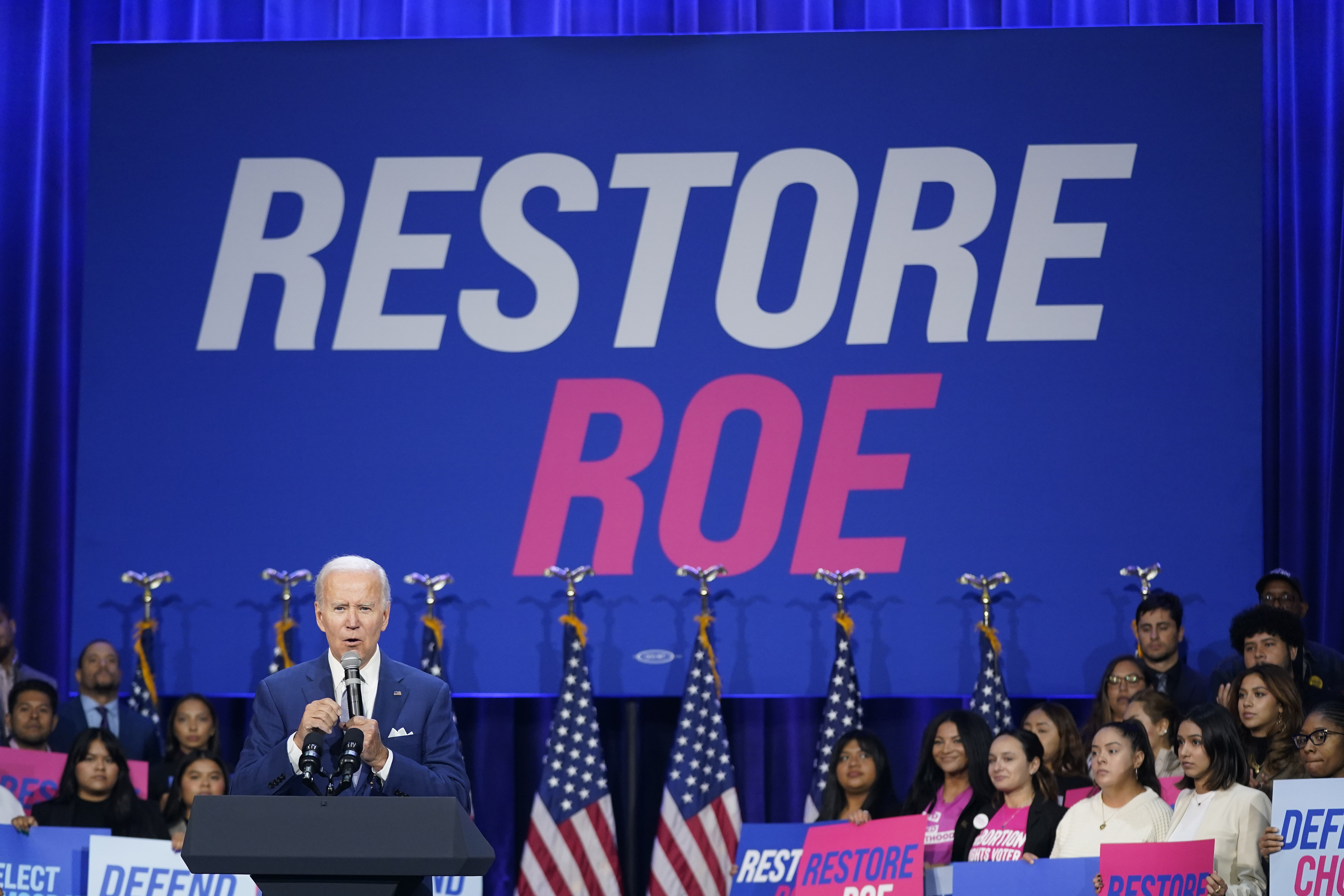 Cortez Masto sees victory on abortion access differently, though, describing herself and the majority she preserved as a firewall against further GOP attempts to chip away at abortion access: "By re-electing me, we've just now created a backstop in the Senate from the Republicans trying to put a federal abortion ban ... on the floor of the Senate," she said in an interview.

It was hardly a given that the issue would be at the forefront in Nevada, where abortion access was already enshrined in state law. But Cortez Masto said voters in Nevada were “outraged” by the Supreme Court's overturning of Roe, “concerned that it was one step away from a federal abortion ban being introduced by far-right Republicans that would supersede or preempt our state law.”

Even as operatives in both parties started betting that abortion wouldn’t be top of mind for voters, it "didn't fade" on the ground, Senate Majority Leader Chuck Schumer agreed in an interview Monday. Yet now that Democrats have secured the majority, they're more openly acknowledging their federal policymaking limitations and describing their future role more as Cortez Masto did: putting Republicans on record about their position.

In interviews, Democratic senators suggested their focus looking ahead would be on blocking bills like Republican Sen. Lindsey Graham's (R-S.C.) proposed 15-week abortion ban, which openly split the GOP after its September introduction.

Sen. Tina Smith (D-Minn.) said that the “first and foremost job” for Democrats is “to stop any effort to put a national ban in place,” while the second is to “look for all the ways that we can continue to protect access to abortion care,” citing medication abortion.

“Unless we have the votes in the Senate to change the rules in order to pass legislation, that’s the world that we live in,” she said. “But that doesn’t mean that it isn’t useful to press the issue. Because it helps to educate people, it helps to organize people around the issue.”

Sen. Elizabeth Warren (D-Mass.) said she’d like to see her party once again introduce legislation to enshrine abortion rights and “make sure that every Republican is on the record on abortion.” But Warren isn’t calling for the Graham bill to come to the floor to squeeze the GOP.

“That thing is so horrible, I don’t want to see it any place except in the bottom of the trash barrel,” she said.

The Supreme Court’s Roe reversal proved to be perhaps the biggest wild card in the midterm elections, injecting an unpredictable dynamic into a national midterm environment that typically penalizes the party in power. According to the National Election Pool exit polls, conducted by Edison Research in key swing states, voters often ranked abortion below inflation.

But those who ranked it as their most important issue voted for Democratic Senate candidates by substantial margins. In Nevada, for example, 89 percent of voters who said abortion was their top motivator picked Cortez Masto.

Operatives in both parties agreed that until the high court’s decision, the Democratic base showed very little motivation to go to the polls.

The GOP super PAC Senate Leadership Fund, which is closely aligned with Minority Leader Mitch McConnell, found in its internal polling in Senate races that the court decision moved Democratic voters’ enthusiasm to the same level or above GOP enthusiasm. That same polling also showed that swing voters saw economic issues as a higher priority.

But Democrats working on Senate races also saw evidence that the end of the national right to an abortion motivated some swing voters to an extent that was comparable to their base.

After Roe was struck down, Wisconsin Democratic Senate nominee Mandela Barnes’ team conducted a focus group in the Green Bay area with Republican-leaning women. Kory Kozloski, Barnes’ campaign manager, was surprised by the results: The decision was registering across the electorate.

“Even folks who described themselves as pro-life were very, very upset that that fundamental choice was being taken away,” he said. “I remember them saying, ‘I'm pro-life — I would never want to have an abortion myself. But it pisses me off that someone is telling me that I don't have that choice.'”

Margie Omero, a Democratic pollster who worked on Senate and gubernatorial races this cycle, said that her focus groups found that “people who were otherwise Republican-leaning or on the fence — when it came to abortion, just felt like the Dobbs decision had gone way too far.”

Omero said that there is “nothing to suggest” that abortion won’t continue to be a driving force in future elections: “This isn’t a theoretical. Abortion is illegal in a huge part of the country.”

After predicting a commanding victory that didn't come to pass, Republicans and conservative groups are now second-guessing their own party’s post-Roe strategy on abortion.

Sen. Pat Toomey (R-Pa.) said that when it came to abortion this cycle, “Republicans took a while to find their footing, and I'm not sure all Republicans ever did.”

Marilyn Musgrave, vice president of government affairs at the anti-abortion group Susan B. Anthony Pro-Life America, said “Republicans were talking about inflation and crime and not really fighting back” against Democrats’ attacks over abortion.


In Senate races across the country, Republicans indeed ceded the issue to Democrats.

In Pennsylvania, Arizona, Nevada, New Hampshire and Wisconsin, abortion was the first- or second-most mentioned issue in television ads aired by Senate Democrats and their allies, according to the ad-tracking firm AdImpact. In those same states, abortion ranged from not being mentioned at all in GOP Senate ads to, at most, being the ninth-most talked-about topic.

One notable exception to Democrats flooding the zone on abortion is Georgia, a culturally conservative state, where it was only the seventh-most mentioned issue in commercials aired by incumbent Sen. Raphael Warnock and Democratic groups helping him.

With the limitations in Congress, abortion rights advocates like Alexis McGill Johnson, president of Planned Parenthood, see much of the fight playing out at the state level, even as they call for another vote on Democrats’ signature abortion access bill. (That measure failed on the Senate floor twice this year, amid opposition from centrist Democratic Sen. Joe Manchin and the entire GOP.)

”We want to hold the administration to the fire on what it would look like to codify Roe, and we also recognize we're going to need to use the next Congress and the next set of legislative sessions ... at the state level to continue to educate the American people,” she said.