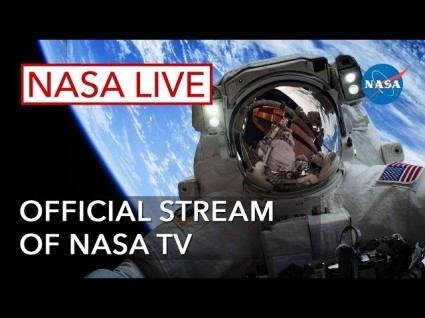 Yes, I've heard all the arguments about the space program. (Including Gil-Scott Heron's.) But there's no denying that the men and women of NASA are extraordinarily brave, and we should at least bear witness to their work. We've gotten so blase about the risks they take. They are walking in space! Let's pay attention, if only for a couple of minutes. Via CNN:

Things are about to get busy on the International Space Station as the first in a series of end-of-the-year spacewalks is set to kick off Tuesday morning.

First-time spacewalkers and NASA astronauts Josh Cassada and Frank Rubio will begin their excursion outside the space station at about 8 a.m. ET, with live coverage starting on NASA’s website at 6:30 a.m. ET. The event is expected to last for about seven hours.

The astronauts will assemble a mounting bracket on the starboard side of the space station’s truss. The hardware that will be installed during the spacewalk was delivered to the space station on November 9 aboard a Northrop Grumman’s Cygnus spacecraft, which safely delivered its cargo despite only one of its two solar arrays deploying after launch.