NICOLE Scherzinger sent her followers into meltdown as she took an ice bath in a sexy swimsuit.

The 44-year-old Pussycat Doll gave a glimpse into how she keeps her mind and body so fresh by taking the plunge on her terrace in LA.

Some fans pointed out a notable lack of ice in her pictures but many others were distracted by her stunning figure.

One wrote: “All hail the queen.”

Another said: “A woman’s dream 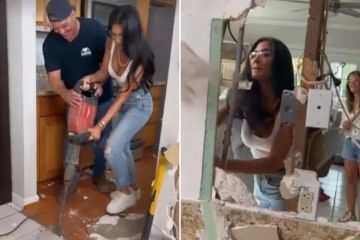 The singer, who is currently a judge on the US version of The Masked Singer, has a habit of posting attention-grabbing red hot snaps on social media.

She recently wore an eye-catching 90s-inspired pink dress and struck flirty poses ahead of the latest episode of the celeb talent show.

I Will Survive singer Gloria Gaynor, 79, and broadcaster Jerry Springer, 78, are among the celebrities who have taken part in the current run.

In November 2017, FOX began developing an American version of the South Korean reality show The King of Mask Singer.

Nicole was the last judge to join the show alongside Ken Jeong, Jenny McCarthy, and Robin Thicke.

Nicole first met her hunk boyfriend when he appeared on the X Factor: Celebrity series.

The loved-up duo have spent time in Spain, Mexico and California this year.

Today24.pro
In the age of megachurches, communion has become a big business The Darkest Secret and Tragedy of Edwin Valero Hans Niemann in the sole lead at the 3rd El Llobregat Open Best Android app 2022 – Google reveals top pick for the year and it’s totally free