SHE’S got a huge elephant tattoo on her stomach, and is often faced with questions about how pregnancy has affected the inking.

So Emma Scott decided to take to TikTok to share a video which documented the changes to her tattoo during her first pregnancy, and post-baby weight loss, as well as how it looks now she’s pregnant again.

“This is my tattoo before I got pregnant,” Emma began, showing her colourful tattoo, surrounded by flowers.

“You can see the lines are really thick. So that’s it there.”

She then showed her stomach as it looked four months after she had her daughter by caesarean section.

“I had this big overhang, loads of stretch marks,” she said. 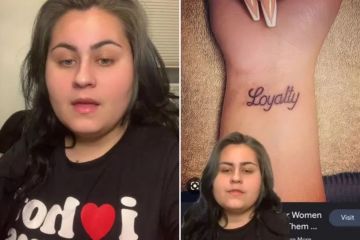 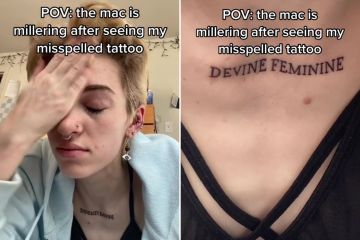 “And the stretch marks were deep.”

Emma then lost “a lot of weight”, and “the tattoo went back to almost normal”.

“Obviously there’s loose skin and stretch marks there, but I was really chuffed with that,” she said.

“I was really happy with how it looked – the loose skin there is quite minimal, and that was all from just losing weight and toning up.

“But to go from that to that, I was really happy with that post baby.”

Now the tattoo is “really stretched out” once again, as she’s expecting another baby.

“What happens to a belly tattoo pre, during & post baby!” Emma captioned her video.

“I think the stretch marks look badass,” one person commented on the video.

“And you did so well losing all the weight!”

To which Emma replied: “Aw thank you. I was so upset by them but now I think they’re empowering.”

“Elephant with Tiger stripes. Love it,” another added.

As someone else commented: “Omg it looks so good pregnant tho – it gives the image dimension.”

And another wrote: “A midwife told me I would ruin my tattoo!

“It looks amazing still just with some added stretch marks.”