WITH the cost-of-living crisis putting a huge strain on many people and their finances, it seems as though more and more of us are turning to side hustles to bring in some extra cash.

What started out as a side hustle for Ana Cantu, 36, while she followed her husband, Graeme, 36, on Military postings across the UK and Europe, has now become her full-time job.

Ana Cantu is a mum-of-two that started her side hustle as a hobby while she followed her husband Graeme on Military postings[/caption] Ana launched her business, The Little Green Paper Shop, as a crafting hobby but now she has six members of staff[/caption] The business turned over £500k in just a year[/caption]

Ana Cantu is a 37-year-old mum-of-two, who is originally from Mexico and now lives in Sandbach, Cheshire.

What started out as a one person hobby in an attempt to earn some spare cash, her eco-friendly stationery and packaging business quickly expanded and not only does she now employ a team of six people, but her business, The Little Green Paper Shop, now turns over more than £500,000 per year.

Ana revealed that she started making wedding stationery whilst raising her children, now six and eight, back in 2019, but has grown her business and now has customers all over the world.

The savvy mum-of-two told Fabulous: “As a military wife it was difficult to retain a job when we had a new posting every two years. 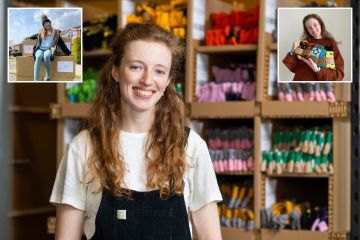 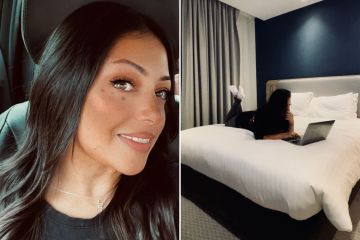 “I am a very creative person and always enjoyed event planning, crafting and creating, so I started making wedding invitations at my kitchen table.”

Back in 2019, Ana started her company which at the time was called Little Green Wedding and by 2020, Little Green Paper Shop was created.

Ana realised that there was a growing requirement for brides to be sustainable in their wedding planning and decided to develop a new range aimed at eco-conscious couples.

She added: “Sustainability was a growing theme in the industry and a really important one at that, the amount of waste generated on a wedding day is significant.

“I studied Product Design and Marketing at University, which helped me get the brand off the ground.

“Initially I spent around £5,000 in stock – not all of it worked out the way I wanted it to, but it led us to where we are today.

“I was so nervous starting out – investing in stock and machinery felt like a huge leap of faith, but I quickly began to get orders through the selling platform Etsy and a website which I had built myself using Shopify.”

Unfortunately, just as the brand got going, COVID struck and the wedding market collapsed overnight.

Ana continued: “It was very stressful, we had many outstanding orders which had to be put on hold, and many customers who needed to re-order for new dates or were seeking refunds.”

However, the onslaught of the pandemic presented an opportunity which Ana was quick to seize upon – many people had more time but less social contact, and sending a handwritten high quality greeting card became an outlet for many.

Using the brand, marketing and production built for her wedding business, Ana pivoted to launch Little Green Paper Shop, which can be found in Sandbach Enterprise Centre, which has a focus on high end, business prints and greeting cards.

Ana focused her range on a single unique selling point – the cards are all made from reclaimed materials from textile offcuts to elephant and reindeer poop.

I spent endless hours a day developing the brand and website, learning as I went along.

She explained: “It’s so sad to see a card accompany a present and end up in the bin a few days after use, but our cards create a lasting memory and activity for the recipient – and who doesn’t love flowers and a card?

“Many people talk about ‘passive income’ and this very much was not in that space.

“I spent endless hours a day developing the brand and website, learning as I went along.

“Balancing this with home-schooling two primary school aged boys was a challenge in itself.

“Any spare moment I had was focussed upon growing the business.

“Being a solo operation-design, marketing, technology, sales and fulfilment – was quickly too much for me.

“I realised I needed additional capacity to continue to grow. I had orders coming in from small businesses just starting up, consumers and retailers and just couldn’t keep up – I didn’t want to let anyone down”.

The savvy side hustler explained that the orders started growing and before she knew it, the tabletop business had taken over every space in her house.

Boxes were piled high in the garage and hallways and spare bedrooms had become production spaces.

Ana revealed: “With low operating costs running from home there was limited risk, but I took a leap of faith and took on a few members of staff and premises in 2021 to help with production and welcomed new team members of staff for Sales and Design in 2022”.

Ana explained that she is currency looking for a larger premises as the business is continuing to grow quickly.

The mum-of-two continued: “This has allowed us additional capacity to focus on high volume orders which make up a large amount of our custom these days.

“We have quickly become suppliers to many other smaller businesses making seeded products and many who want to demonstrate their sustainable credentials to the market.

“We started listing on other platforms such as Amazon, Not on the High Street and a number of wholesale market places and started to draw more attention from well known high street brands and this allowed us to scale at pace”.

Ana continued to diversify her product lines introducing business stationery, promotional items, seasonal ranges and packaging and soon struck up deals with recognisable brands all over the world.

She said: “We are lucky enough to have Little Green Paper Shop products stocked by some of the UK’s premier tourist attractions such as Chester Zoo, National Trust and English Heritage, and our business stationery is used by the like of Monica Vinader, Levi’s, global coffee chains and some of the world’s biggest tech companies”.

This savvy business woman explained that her company has been extremely profitable and has made £500,000.

She explained: “Our revenue has grown to £500k, doubling year on year.

“I keep my own wage as low as possible – it is important to be able to invest profits back into growth which will hopefully pay off long term.

“November and December are the best months as Greeting Cards do really well in the festive period.

“In the two months before Christmas in 2021, our revenue was six figures.

“This has not been unheard of during other months in the current year as we take on larger corporate clients.

Our revenue has grown to £500k, doubling year on year.

“We don’t want to stop here and are continually looking for ways to get our products into the hands of new customers and develop new and exciting ranges.

“We are particularly excited about our 2023 plantable calendar and packaging ranges and will be exhibiting these at a number of trade shows this year.

“We have also signed a number of recent deals to sell both consumer products and packaging through a range of other vendors who we ourselves look up to.

“We want to make a difference to the packaging industry and that is the goal for 2023”.

If you are looking to start your own side hustle and aren’t sure where to start, Ana has shared her top three tips.

She advised: “Delegate – this has been the hardest part for me to learn, but once you find people you can trust and build a team, your every day becomes easier and allows for time to focus on business growth.

I'm A Celeb's Boy George is godfather to famous reality star but can you guess who?

“Find your niche – the markets are big but if you can create a unique selling point that is not heavily exploited your product will do better.

“Be Bold – businesses will not grow without investment, if you believe in your idea, trust yourself and take a leap of faith, then put all your profits back into growth”.

Man City star Ederson braves the cold in shorts as he strolls around Cheshire in £1,600 Gucci ensemble alongside Wag