LOVE Island star Tasha Ghouri has set pulses racing in a TINY thong bodysuit as she flashed her bum in a sexy new photoshoot.

The reality TV star – who rose to fame on the ITV2 dating show earlier this year – posed in a steamy behind-the-scenes video for her recent modelling shoot with lingerie company Ann Summers.

Tasha, 25, took to her Instagram grid with the sexy clips, which showed her baring her bum in a very revealing thong bodysuit.

She could be seen strutting her stuff towards the camera in the sparkling green number, blowing a kiss as she pouted.

The TV star then walked away – showing off her peachy behind in the high-cut outfit, which she paired with leather thigh-high boots.

Tasha completed her sexy look by letting her blonde hair tumble down in long curls, opting for glam make-up and a red lip. 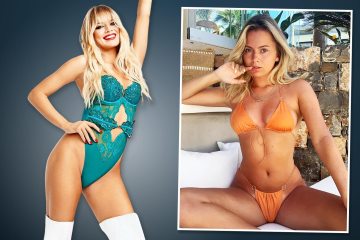 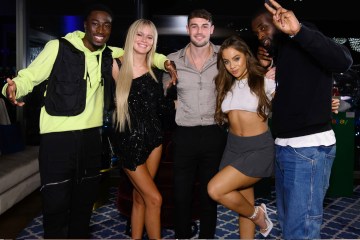 The Love Island runner-up was also seen dancing in the skimpy outfit, shaking her bottom back and forth in front of the camera.

She also donned a red underwear set, showing off her abs, as she struck more poses surrounded by presents for the Christmas shoot.

Tasha penned: “Okay… so a goal of mine was to be in an Ann Summers campaign even as a model back in the day so to be the front of the campaign is just the next level.

“Thank you Ann Summers for giving me this incredible opportunity to be a part of the family – I look forward to the future working an incredible team.”

I feel pressure to look a certain way after thin-shaming, says Adam Collard

IN WITH THE IN-LAWS

Meanwhile, Tasha’s followers flooded the comments section to gush over her as “stunning”, “unreal” and “beautiful”.

Among them was Tasha’s boyfriend Andrew Le Page – who cheekily confirmed their marriage plans by saying she’s “the one”.

A fan tagged Andrew, 27, writing: “No pressure, but she is definitely the one. Wifey material, you two are perfect together.”

Andrew wrote back: “Don’t worry, I know she’s the one.”

It comes after Tasha vowed to be the first deaf winner on a iconic British TV show to encourage inclusion of the deaf and hard-of-hearing community.

Despite dreams of competing on Strictly Come Dancing one day, Tasha hopes to become an advocate – just like 2021 series winner Rose-Ayling Ellis.

“The deaf community can often be overlooked, so that’s why its so important to use our voices and to keep raising awareness because it’s not spoken about enough,” Tasha told The Sun.

“I’m A Celeb is definitely not for me… I’m not a creepy crawlies’ girl. You will not see me in that jungle.”

Channel 4 bosses are likely to try and snap up Tasha to star in the next series of The Great Celebrity Bake Off, in aid of Stand Up To Cancer.