A BBC Breakfast fan has been left spooked after spotting something very eerie during Carol Kirkwood’s weather report.

Carol, 60, was on hand to update viewers on the latest weather around the country on today’s show.

The star looked as lovely as ever in a purple and pink leopard print dress.

But one BBC Breakfast viewer was more distracted by what was going on behind Carol as her forecast played out on screen.

Carol explained how it had been a rainy start for most of the country and that it was going to continue to “push northwards”.

She then gestured to show the cloud that was associated with the rain, as it swirled into position. 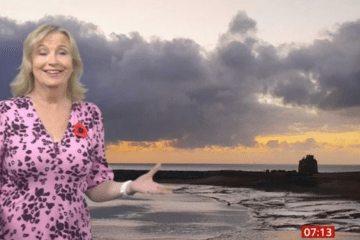 shaking in her boots 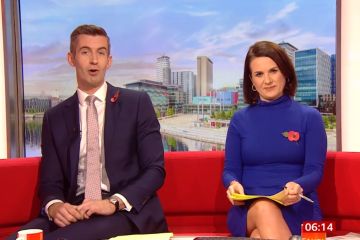 She added: “See that speckly bit? That’s indicating showers that will come our way behind the rain.”

It was at this point that the viewer took a screenshot of Carol’s report and tweeted alongside it: “Atmospheric masked cloud face being shared by Carol this morning #BBCBreakfast.”

Indeed, the cloud formation looked like two eyes with the speckled bit Carol referred to acting like a mask over the rest of the face.

Earlier this month, it was one of Carol’s dresses that distracted viewers.

For that show, Carol wore a pretty blue dress with white spot detailing.

The presenter explained to viewers about the high winds and rain battering parts of the country.

As she spoke, the white arrows for wind and the clouds swirled on the screen, and the moment distracted some viewers watching at home.

Taking to Twitter, one BBC Breakfast viewer tweeted a screenshot of Carol in front of the map and said: “Interesting choice of dress for Carol this morning.

BBC Breakfast airs daily from 6am on BBC One.