Emily sprawled on the floor as she paired the party piece with an elegant snug jumper and matching sparkling shoes.

She flashed a sultry look ay the camera as she struck a pose on the exposed wooden floorboards, with a trolley of festive drinks seen in the background.

She then tagged the retailer, with whom she launched a sassy spring/summer edit earlier this year. 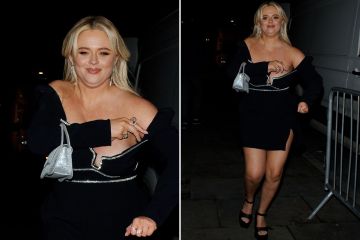 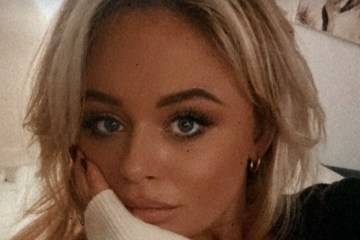 Fans were quick to gush over her festive season attire, with one writing: “Gorgey.”

A second put: “Lovely pins them

” as a third continued: “Gorgeous and beautiful xx”

The stylish star recently showed off her incredible curves in a hot pink mini dress.

It’s not the first time Emily has dazzled fans with her wardrobe choice.

She wowed in an orange crop top and matching mini-skirt as she revealed her stunning curves on TV.

Yet last month, The Inbetweeners favourite admitted she was having a “hard time” after her split with former reality star and tree surgeon Liam McGough.

She told how she has turned to poetry during her down days, including The Orange by Wendy Cope, which ends with the sentence: “I love you. I’m glad I exist.”

At the time, a source revealed: “Emily and Liam have been friends for a long time and were together for seven months, but sadly have decided to separate.”

Emily, 32, often dazzles fans with her sexy style[/caption] Emily recently admitted she was having a ‘hard time’ after her split with her partner[/caption] Emily and her Big Brother star boyfriend Liam split earlier this year[/caption]