RONNIE O’SULLIVAN says he is a ‘snooker fake’ who should not be playing.

The Rocket is bidding to extend his record of seven UK Championships after beating Matthew Stevens in round one yesterday.

But O’Sullivan, 47 next month, said: “I shouldn’t even be playing at my age.

“I don’t take it too seriously. I find it all quite funny really.

“I have a bit of an impostor syndrome. I felt happier when I had that run of losing five finals.

“But when I started winning tournaments again I didn’t really feel I deserved it. It felt like a plot to allow me to do it, and I felt like a fake. 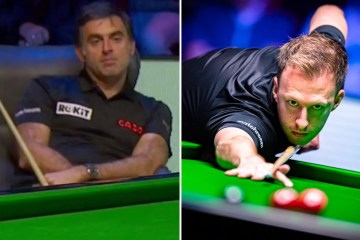 “When I won the worlds again in May I didn’t feel great about it.

“I am feeling flat to be honest with you and don’t want to play snooker at the moment.

“I don’t play much and really don’t care. I mainly keep coming because it’s something to do.

“I had a year out that time and I got bored working on the pig farm.

“I listen to my body and listen to my mind. I apply myself mentally well in matches but whether I play good or bad I don’t really care.

“I could get beat 6-0 and still have a good time in York. I am under no pressure at all so every match is like practice even if it is not easy.

“That’s how we should all be — people take sport too seriously.”

Today24.pro
RoboCV: stacker robot One of The Greatest Britons in History - Joe Calzaghe Billionaire investor Howard Marks touts a bargain boom as interest-rate fears grip markets - and predicts a surge in companies going bankrupt I make $1,000 a month by promoting Amazon products on social media. It only takes 5 hours per week — here's how I set up my side hustle.