WHILE many people see the word ‘fat’ as one that carries heavy negative connotations and shouldn’t be used to describe someone’s appearance, one woman has revealed that she embraces the word and describes herself as “fat” and “hot”.

20-year-old Mak, who is known on TikTok as @chunkymak has revealed that she is trolled for her plus-size body.

A woman named Mak has taken to TikTok to reveal that she is trolled for her plus-size body but she doesn’t care, as she thinks she is “fat” and “hot”[/caption]

But regardless of the comments she regularly receives from people about her size and appearance, Mak explained that she won’t let the haters get her down.

Instead, Mak is embracing her body and often shares body confidence clips on social media, to encourage others to do the same.

As a result, Mak has amassed an impressive 97.5k followers and 7.2million likes on the video sharing platform, where she is regularly praised by her fans for her confidence.

In one of her recent self-love videos shared on social media, which she uploaded with the caption ‘this just makes me smile lol’, Mak showed off her plus-size body and sent a bold message to her haters. 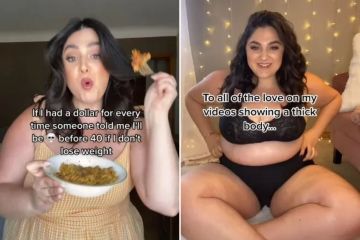 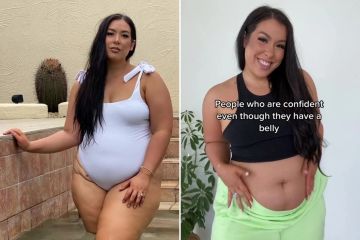 The plus-size beauty remixed a popular lyric that is currently trending on TikTok, that originally reads: “Nobody move, there’s blood on the floor”.

But Mak created her own version of the iconic lyric by Thundercat, titled Them Changes, as she changed it to: “Nobody move, there’s a hot fat woman that loves her body even though everyone in society tells her not to”.

In the clip, Mak pulls down her high-waisted grey tracksuit bottoms and lifts up her small yellow crop top, as she shows off her underboob and belly.

The young woman danced around as she embraced her stomach, showing off her confidence.

Her video has clearly resonated with many social media users, as it has quickly racked up 10.8k views.

Many TikTok users could relate to Mak’s video and aspired to be as confident as she is, which many reflected in the comments.

One person said: “Ahaha I love this”.

Another added: “Wish I could be as confident as you”.

Whilst one user posted: “Literally adore you”.

Meanwhile, someone else noted: “As you should!!!”

Today24.pro
The Darkest Secret and Tragedy of Edwin Valero Anthony Joshua returns to America in search of new coach ahead of boxing return and links up with trainer Virgil Hunter Hans Niemann in the sole lead at the 3rd El Llobregat Open In the age of megachurches, communion has become a big business