JARRELL MILLER claimed Anthony Joshua is “not a killer” after Oleksandr Usyk “beat him up.”

Miller, who failed to fight AJ in 2019 after a series of failed drug tests, still wants to settle the score with his old rival.

Miller, 34, said on the BOXR podcast: “I’ve still got to punch that scallywag, crumpets and tea because if you watching, ever since I punked his a*** in New York he’s never been the same.

“He lost all his marbles, Andy [Ruiz Jr] smoked him, Usyk smoked him twice.

“I tell people this, media can be your worst enemy or your best friend. Media was both, it made him be something that he wasn’t. 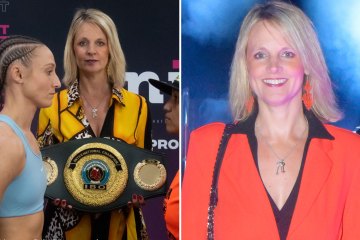 “He’s not a killer, he’s not an animal, he’s not a savage. I know killers and savages in the ring, he’s not one of them.

“So, I always knew that, and I knew whenever he’s in front of a super tough task he’s going to crumble, he’s going to crack, and Usyk just ran from him and beat him up.”

Joshua is set to return in the new year after taking a break from boxing to recover mentally.

Whereas Miller wants to get back in the ring after being granted a professional boxing licence in Las Vegas again.

The shamed heavyweight was initially hit with a two-year ban dating back to a positive test ahead of his proposed fight with Jerry Forrest.

But the Nevada State Athletic Commission have now cleared Miller to fight just over two years on.

He blamed his failed test before fighting AJ on a tainted supplement and stem cell shots in his elbow.

AJ went on to suffer a shock loss, the first of his career, against stand-in Andy Ruiz Jr, 33.

Miller in 2020 earned a contract with Bob Arum’s Top Rank stable but again tested positive for a banned substance.

This time the ex-kickboxer put it down to a SEX PILL and was handed a two-year suspension.

Miller enrolled in VADA testing in December 2020 and has returned clean drug tests since, which saw him able to return this summer.

60 TEAMS TO VISIT MFC IN FEBRUARY