CONOR McGREGOR looks almost unrecognisable without his beard as he showed off his luxury watch and partied with shots.

The UFC legend stunned fans after shaving off his trademark beard, initially for a fancy dress party at Halloween.

But McGregor has kept up the clean shaven look as he posed beardless on Instagram.

And fans were all left saying the same thing, echoing the Irishman’s infamous words after being called out by Jeremy Stephens in 2016. 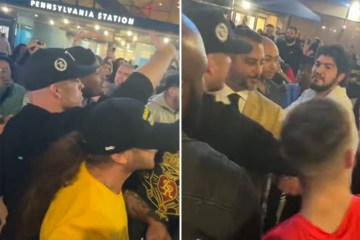 McGregor, 34, enjoyed a night out on the town, showing off his round of shots.

He also gave a glimpse of his £730,000 Jacob & Co Astronomia Tourbillon Baguette watch and bright white Prada trainers, worth nearly £9000.

Despite the night out, McGregor is back training in his Straight Blast Gym in Dublin ahead of an anticipated comeback fight next year.

He is yet to return since breaking his leg in the first round of his trilogy bout against Dustin Poirier, 33, in July 2021.

The formet two-weight champion has been ruled out of fighting until 2023, having undertaken his first Hollywood role.

McGregor is starring in a reboot of Patrick Swayze’s 1989 classic Roadhouse, alongside Jake Gyllenhaal.

But it has paved the way for superstar to make a massive return to the cage next year.