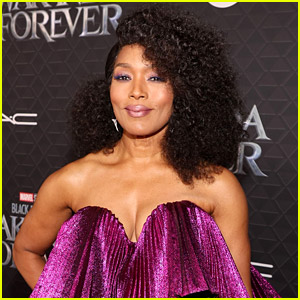 There is one scene in Black Panther: Wakanda Forever that Angela Bassett initially did not want to film.

The 64-year-old 9-1-1 star plays Queen Ramonda in the newest entry to the Marvel Cinematic Universe. Now that the movie is in theaters, she is spilling some tea about her hesitancies about one of her character’s major moments.

Just as a warning, there are major spoilers ahead, and if you haven’t seen Black Panther: Wakanda Forever you might want to proceed with caution.

Here’s your last warning before a major spoiler comes!

Angela revealed that at first she was not in agreement with her character’s death and that she talked about it with director Ryan Coogler.

She also revealed how Ryan responded to her and that it was calming. “‘He was like, ‘Angela, I know, I know, but look, to die is not really to die in this world. It doesn’t really have to mean that,’” she recalled.

“All kinds of crazy things happen,” she added, in reference to the various stars who have returned to their roles.

Did you know that Angela might make MCU history?

Amidst burnout and instability, should creators complain about their jobs?

Today24.pro
One of The Greatest Britons in History - Joe Calzaghe Billionaire investor Howard Marks touts a bargain boom as interest-rate fears grip markets - and predicts a surge in companies going bankrupt I make $1,000 a month by promoting Amazon products on social media. It only takes 5 hours per week — here's how I set up my side hustle. RoboCV: stacker robot