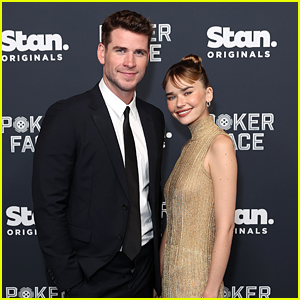 Liam Hemsworth and his longtime love Gabriella Brooks are clearly still going strong as a couple despite those breakup rumors from a few months ago.

The couple just made their red carpet debut at the premiere of Liam‘s new movie Poker Face on Tuesday (November 15) at Hoyts Entertainment Quarter in Sydney, Australia.

Liam and Gabriella started dating in late 2019 and she made rare comments about their relationship at the end of last year. In August 2022, it was rumored that they went their separate ways, but it’s clear they are still together.

Also in attendance at the premiere was the film’s star and director, Russell Crowe, alongside his girlfriend Britney Theriot. They just made their public debut as a couple at the film’s previous premiere in Italy.

Liam‘s co-star and real-life sister-in-law Elsa Pataky was also there, as well as co-stars Steve Bastoni and Daniel MacPherson.

Poker Face will be released in select theaters on November 16 and on digital on November 22. Watch the trailer now!

Click through the gallery for 35+ photos from the premiere…