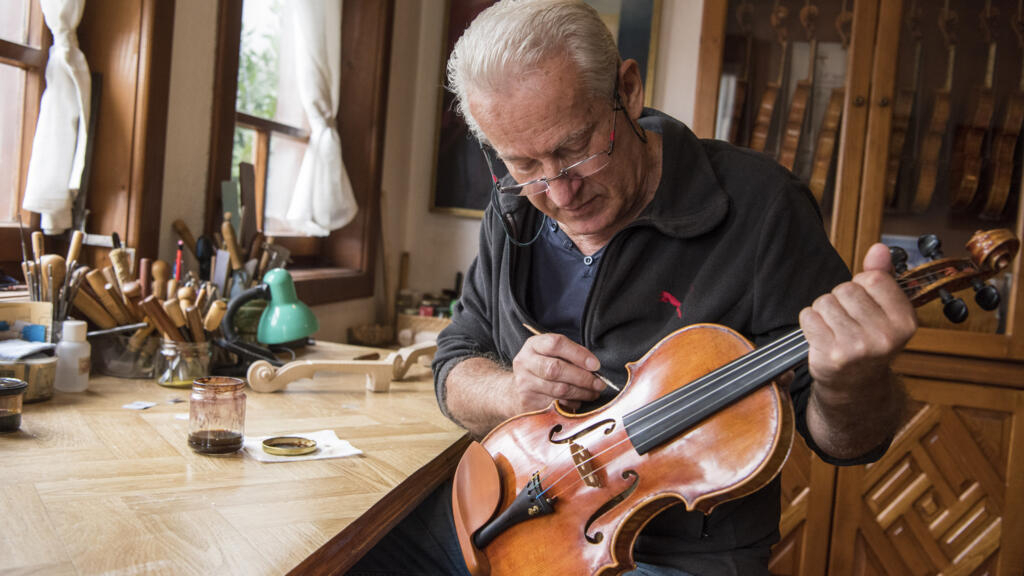 Nearly 40 years later, Bogdanoski's son is now an acclaimed violinist performing in Barcelona, and his line of handcrafted, award-winning violins are sought out by top musicians around the world. "The talent that my son showed at an early age had to be accompanied by a good instrument. Since we couldn’t afford it, I got a crazy idea to make violins -- one that would be perfect for him. That is how it started," Bogdanoski, 69, told AFP. Based in a humble workshop infused with the smell of varnish and aged wood in North Macedonia's Veles hill country, the self-taught luthier says he can spend months, even years, crafting a single violin. First, the maple and pine are sourced from the forests of Bosnia and spend years drying before they can be sanded down, shaped and carved into a violin. Bogdanoski estimates that between 10 and 15 percent of the wood he carefully selects and purchases actually makes the cut in the end. And then comes the complex process of piecing together the instrument and treating the wood, and later testing the violin to make sure the sound is pitch perfect. "Our obsession, and the goal of our work, is not building violins. Millions of people do that," Bogdanoski explains. "It is about making a sound. That is an eternal search, just like the alchemist's search for the philosopher's stone." Trained as a painter, Bogdanoski says the art of crafting a violin is a creative pursuit that has little to do with the potentially large financial windfalls that come with making the classical instrument. "Our work is not commercial but creative," says Bogdanoski, while refusing to disclose the price of his instruments. "If there is commerciality, there is no art," adds his wife and work partner Marija, who is a retired violin teacher. To date, they have won two awards from the prestigious Violin Society of America, which Bogdanoski said was "confirmation" of their excellence. Along with the accolades, his violins have been played by prominent classical performers including Robert Lakatos from Serbia and Greece's Jonian Ilias Kadesha. But even with the awards and sterling reputation, Bogdanoski says crafting instruments capable of new, fresh sounds continues to inspire him. "Even after three centuries of building instruments, besides the great Italian and Cremona masters, we still have space to search for and make different sound," says Bogdanoski.

Watch as van veers ‘dangerously close’ to child riding bike on road – but who’s in the wrong?

Today24.pro
The Darkest Secret and Tragedy of Edwin Valero Hans Niemann in the sole lead at the 3rd El Llobregat Open Five ways struggling families can get free cash to help pay for food this Christmas In the age of megachurches, communion has become a big business