KATIE Price has left her fans baffled after stepping out in a giant see-through rain mac on a romantic date in Thailand with Carl Woods.

The former glamour model kept it casual in baggy clothes and sliders, covering up with a orange-tinted poncho in case of bad weather.

Katie, 44, who headed to a cosmetic surgeon earlier this week and is rumoured to be having a boob job, looked casual on her night out.

The mother-of-five donned a tourist-style poncho raincoat for the evening, on top of black leggings, pink shorts and a novelty t-shirt.

She matched with her fiancé Carl Woods in the tops, which were printed with a sunset and the name of a famous Thai beach, Koh Tao.

Walking hand-in-hand with Carl, 33, who tied his hair up into a man bun, Katie appeared make-up free as she also styled her hair up. 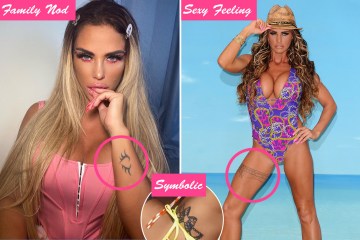 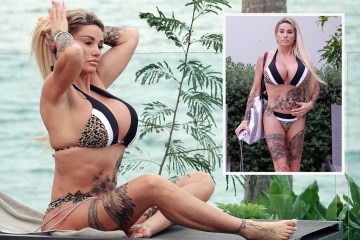 While Carl opted for causal black jogging bottoms and a pair of sparkling white trainers, Katie completed her look with green sliders.

The pair packed on the PDA as they showed off their bizarre outfit choices, leaning in for a kiss on their night out in Thailand.

She jetted off with her fiance Carl for a £252-a-night holiday, as she splashed out ahead of her bankruptcy hearing.

Earlier this week, Katie and Carl were sighted in Bangkok as they went along to a consultation together, with the intention of having more plastic surgery.

It would mark Katie’s 16th boob job if she went under the knife.

This year, her family were reportedly “horrified” after she went under the knife again to get her “biggest ever” boob job.

Her loved ones were said to be “disappointed” with doctors in Brussels who agreed to carry out the surgery.

A source told The Mirror at the time: “It’s getting really silly now and more than a little irresponsible. Everyone’s quite horrified, to be honest.”

Her mum Amy Price previously admitted Katie “doesn’t need” to go under the knife, adding: “She doesn’t tell me now because she knows I’ll go ballistic.”

“Maybe she does it because she doesn’t feel she’s attractive enough, or maybe it’s body dysmorphia. Part of the problem is she gets her surgeries free, so someone is always capitalising on her name.”

Elsewhere, former car dealer Carl also risked seven years in jail after stripping down for a sexy OnlyFans shoot while in Thailand.

Katie also revealed her figure in an animal-print bikini as she also stripped down to take a dip in the pool at her swanky hotel.

She donned the black and white swimwear, which featured an animal-print design, as she let her long blonde locks flow behind her.

Mother-of-five Katie completed her look with a pair of white Crocs, a blue and white beach bag and her phone on a long beaded chain.

The OnlyFans star revealed a huge unicorn tattoo across her stomach, as well as a horse inking on her arm and two large bird-themed thigh tattoos as she spent time by the pool.

The couple have been holidaying in Thailand[/caption]

Brazil cruise past South Korea to reach quarterfinals in Qatar

Today24.pro
Five ways struggling families can get free cash to help pay for food this Christmas Best Android app 2022 – Google reveals top pick for the year and it’s totally free The Darkest Secret and Tragedy of Edwin Valero In the age of megachurches, communion has become a big business