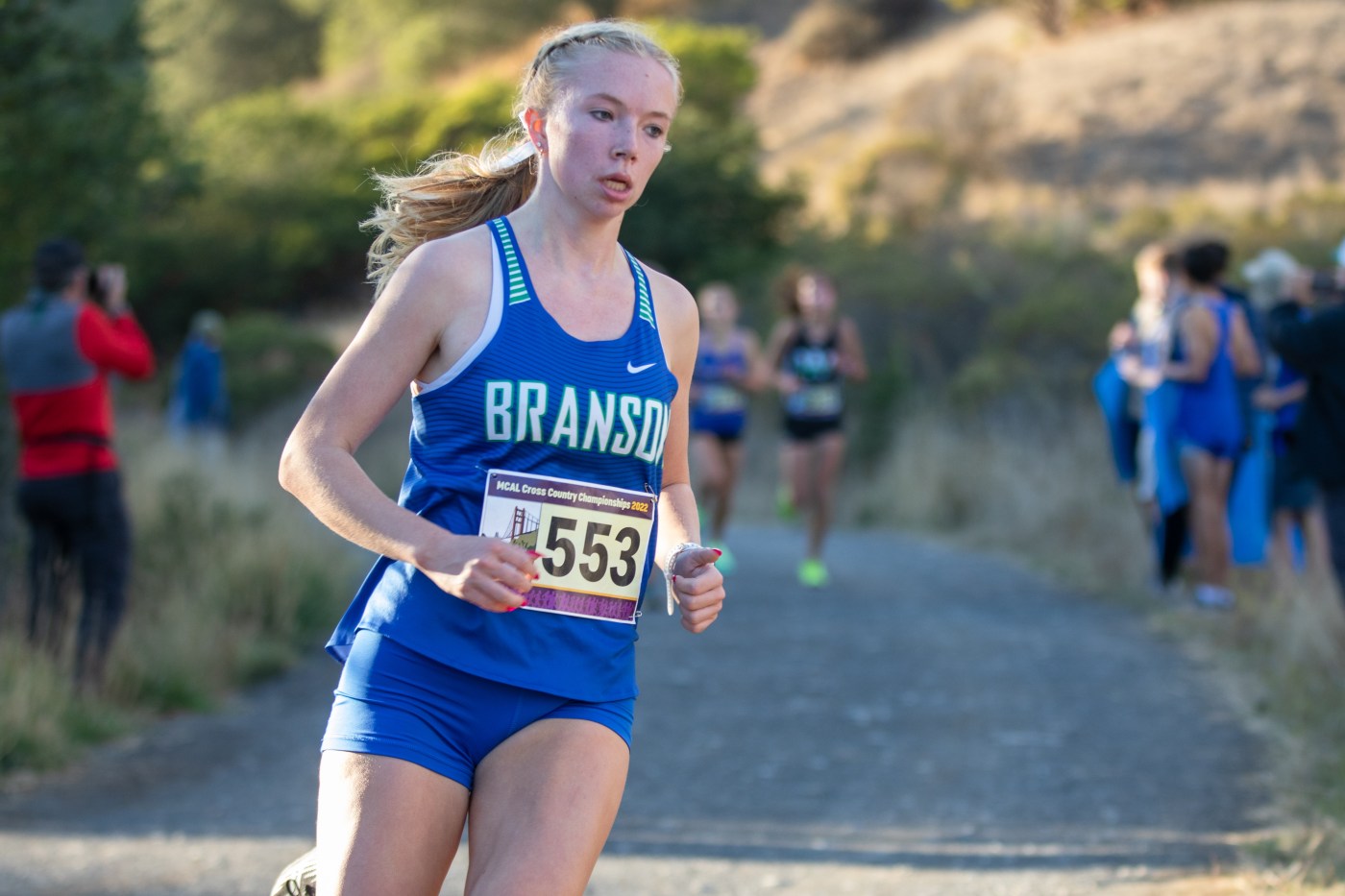 The fall playoffs are in full swing, with league titles and section titles being decided in some sports while other teams have secured berths in NorCal title games.

Three Marin football teams advanced the the NCS semifinals while another program put on a show for the ages in a losing effort. Two girls volleyball teams punched their tickets to the NorCal championships, set to be held on Tuesday.

Branson’s standout runner had been sidelined due to injury the entire season but made her debut at the MCAL championships on Wednesday and won the event outright. Johnson fractured her hip over the summer but returned to action with a winning time of 17 minutes, 39 seconds. Earlier that same day, Johnson signed her letter of intent to run cross country and track at Cal next year.

Redwood’s top runner broke through for his first MCAL championship after placing second last year, completing the course at the College of Marin Indian Valley campus with a time of 14 minutes, 51 seconds on Wednesday. Cutter continued a long tradition of Redwood runners winning MCALs — a Giant has won the individual title eight of the past nine seasons. Cutter — who is set to run for Yale University next season — and his teammates claimed Redwood’s first team title since 2016. The NCS cross country championships are set to take place this Saturday morning at Hayward High.

The Peregrine Falcons went 3-0 this past week, booking their spot in the NorCal D-III championship game. Galland, the libero, led the way on defense and paved the way for Fraser, the setter, to run the offense. Galland piled up 50 digs across the three victories while Fraser dished out a total of 91 assists. Archie Williams hosts the NorCal title game against Mercy at 6 p.m. on Tuesday.

MC needed about a quarter to put its North Coast Section D-IV quarterfinal against Newark Memorial to bed on Saturday. So while Cook’s line of 9-for-12 passing, 144 yards and four touchdowns might not seem too impressive, he did all of that in the first quarter. Cook hit RB Charles Williams for two scores, and also found Jude Baker and Greer Arthur for touchdowns as the Wildcats led 34-0 after 12 minutes. MC rolled 69-0 and faces No. 5 Del Norte in the semifinals at 1 p.m. Saturday.

San Marin also made short work of its opponent in the NCS D-V quarterfinals, routing Alhambra 55-0 on Saturday. The starters came out of the game at halftime but Quinci had already made his mark on the game, with team-highs of six catches for 87 yards and a touchdown. For the season, Quinci ranks third on the team in catches (36), second in yards (574) and is tied for second in receiving touchdowns (7). San Marin hosts No. 5 St. Bernard’s in the semifinals at 7 p.m. Friday. The Mustangs survived a stern test from St. Bernard’s at this same stage last season, pulling out a 26-25 victory.

TL’s goalie produced 10 saves in both games this past week to lead the Trojans to their first NCS D-II championship on record. The top-seeded Trojans bested No. 4 Clayton Valley 9-7 in the semifinals then defeated No. 2 seed and host Marin Academy 12-6 in Saturday’s title game. “Frack had an unbelievable game in the cage. He got his hands on everything and didn’t allow Marin Academy any easy goals,” TL coach Geoff Peters said. The Trojans continue their season when they host a NorCal D-III first-round game against Woodcreek at Novato High on Tuesday.

The standout sophomore defensive back saw his first action of the season as a running back, scoring three times on the ground and adding a fourth through the air as Branson rolled past Roseland University Prep 90-12 in the NCS 8-man quarterfinals. The Bulls led 72-6 at the half. No. 2 Branson hosts No. 3 South Fork in a semifinal at 1 p.m. Saturday. The Bulls defeated South Fork 38-8 in the regular season.

The Bulls got big performances up and down the roster in winning a trio of games to advance to the NorCal D-I championship game. Libero Dignan led the team in digs, compiling 61 digs during the week. Middle blocker Cayman Stein had a pair of big games in the quarterfinals and semifinals, amassing nine and 11 kills, respectively. Stein’s nine kills in the quarterfinals came on nine swings, meaning she hit 1.000 for the match. Branson hits the road for the NorCal title game on Tuesday against St. Mary’s of Stockton.

Grant threw for nearly 300 yards and a touchdown as the sixth-seeded Bulldogs gave No. 3 Analy a scare before falling 49-42 in the NCS D-V quarterfinals. San Rafael went score-for-score against the high-powered Tigers offense before being shut out in the fourth quarter. Grant also ran 11 times for 49 yards and three touchdowns. Brendan Davidson was Grant’s top target, catching 10 balls for 144 yards.

3 dead in Beverly Crest shooting identified as out of state residents; 4 others remain in hospital

I’m a deer-hunting, camo-wearing country girl – I’m beautiful but my skills on a four-wheeler are equally impressiv

Today24.pro
Dumb Things In Marvel's Phase 4 That Didn't Make Any Sense What has happened this MLB offseason? A look at all the moves made in the AL and NL Central. 10+ Outdoor Survival Skills & Bushcraft Tips How to Fall Asleep in 60 Seconds (OR LESS)