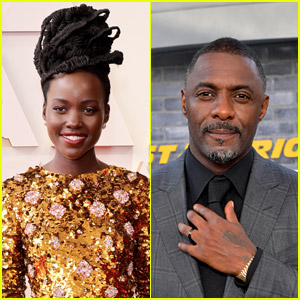 Lupita Nyog’o has her sights set on getting Idris Elba in Black Panther 3.

Although the movie isn’t officially in the works yet, Black Panther: Wakanda Forever – the latest movie in the Marvel Cinematic Universe and the second in the Black Panther saga – is already shaping up to be a major hit.

She opened up about her dream casting for another movie in the franchise during a recent interview.

Lupita told E! News that she was very down for bringing on the Beast star for a role in another movie. Her reasoning was hard to argue with, too.

“Why not,” she asked. “Idris should be in everything.”

It is worth pointing out that Idris already had a role in the MCU. He played Heimdall in a bevy of Thor movies over the years.

Did you know that a major star from the first movie made a cameo in Black Panther: Wakanda Forever alongside several other surprising celeb appearances.

Also, check out some hidden details from the Black Panther sequel.

Inside pink £1.5million ‘Disney castle’ that comes with 11 bedrooms and nine bathrooms set in 31 acres

Today24.pro
Best Android app 2022 – Google reveals top pick for the year and it’s totally free The Darkest Secret and Tragedy of Edwin Valero In the age of megachurches, communion has become a big business Five ways struggling families can get free cash to help pay for food this Christmas