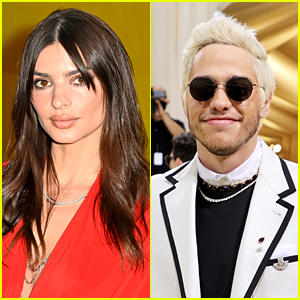 Rumors are swirling that Emily Ratajkowski and Pete Davidson are a new couple and reports from some major press outlets have seemingly confirmed the news.

The rumors started after a fan sent in an alleged sighting to DeuxMoi, which was included in the gossip account’s Sunday Spotted series.

The fan claimed they saw Pete and Emily together, adding “his hands were allll over her and they’re clearly clearly hooking up.”

The internet quickly freaked out over the rumors as people are loving the idea of the two stars being a couple. And now some sources are speaking out about the pair!

Us Weekly‘s insider claims that Pete, 28, and Emily, 31, are indeed dating.

The source said, “Pete and Emily have been talking for a couple months now.” The insider added that the couple are “in the very early stages, but both really like each other.”

Following that report, People confirmed that the two stars are “seeing each other.”

Life & Style has some details about the couple’s recent dinner in Brooklyn, N.Y.

“They were spotted having a romantic dinner together,” the insider said. “They met up through mutual friends since they travel in the same circles in New York.”

The source added that Emily is “definitely into” Pete and hopes that “they can fly under the radar for a bit.”

WHAT DO YOU THINK about Emily Ratajkowski and Pete Davidson being a couple?