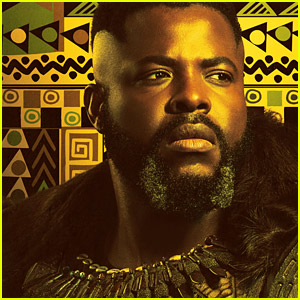 Winston Duke shared some insight into the future of his character M’Baku after the ending of Black Panther: Wakanda Forever.

The latest installment in the Marvel Cinematic Universe premiered in theaters on November 11, and fans had some questions about the final scenes. Thankfully, the 36-year-old actor provided some insight.

Just a heads up that there are major spoilers ahead so proceed with caution if you haven’t seen Black Panther: Wakanda Forever yet.

Click inside to find out what Winston Duke had to say…

Here’s your last warning about spoilers!

As a reminder for anyone who has seen the movie, Black Panther: Wakanda Forever ends with M’Baku staking a claim for the throne in Wakanda. According to his actor, that challenge was a successful one.

“M’Baku is unapologetic. Very proud. A bit conservative,” Winston told Esquire. “It’s kind of a shocking, and, for me, very exciting moment. I get to wonder now what kind of king he will be.”

“It’s kind of cool, though, being revealed as the King of Wakanda at the end of the movie,” he added. “That’s huge. So, whatever that entails, it’s gonna be a fun one.”

However, Winston stopped short of saying that he would be the star of a future Black Panther 3. That being said, the star did allude to interest in a M’Baku spinoff.

Check out all the Black Panther: Wakanda Forever Easter eggs and hidden details you might have missed on your first pass-through of the movie.

Also see who another star wants to recruit for the Black Panther cast if there is a third movie in the franchise.

Today24.pro
Portuguese artist Santiago Ribeiro exhibit in Moscow Anthony Joshua returns to America in search of new coach ahead of boxing return and links up with trainer Virgil Hunter Sam Bankman-Fried could face extradition from the Bahamas to the US: Here's how, legal experts explain The Darkest Secret and Tragedy of Edwin Valero