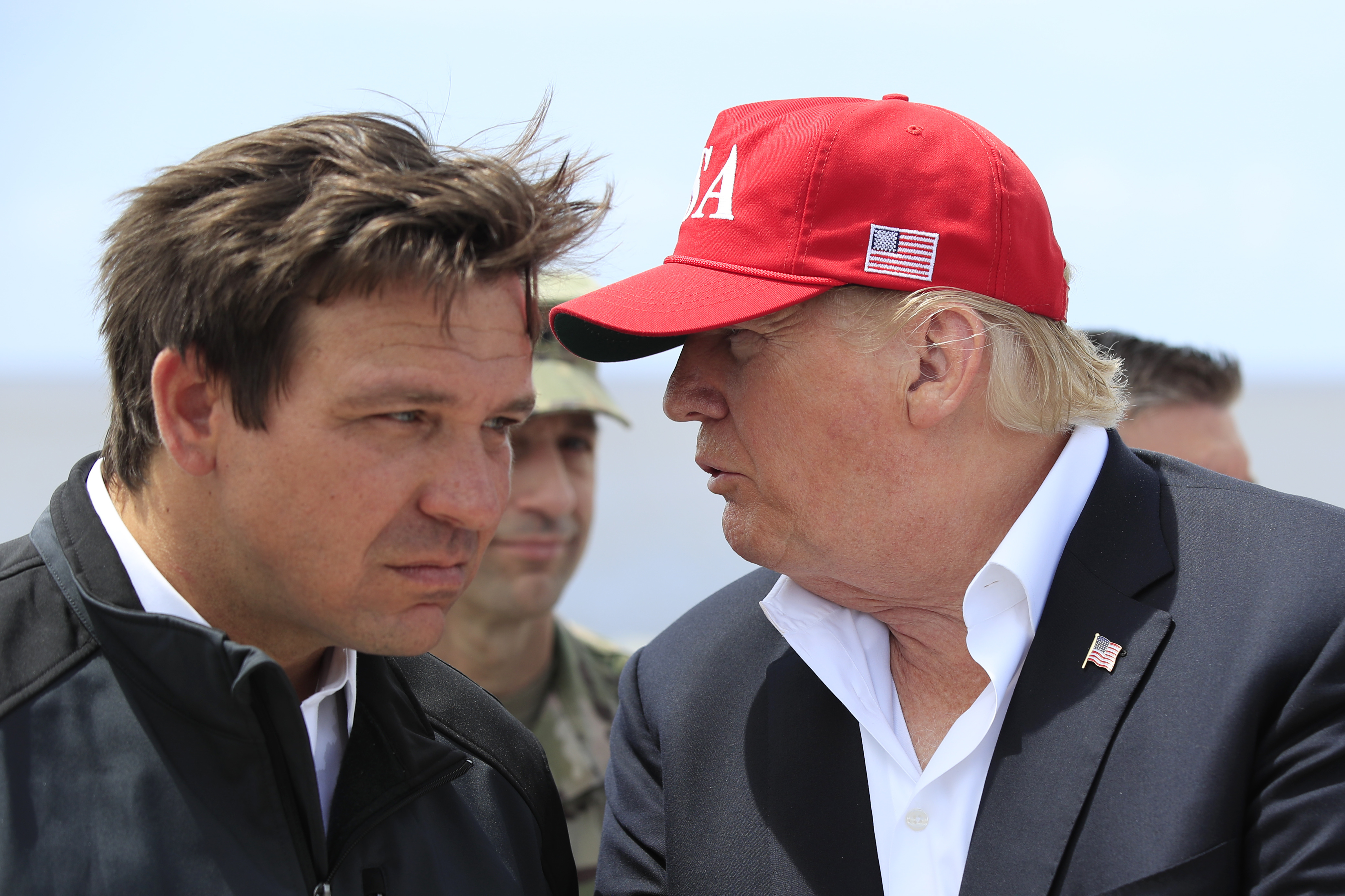 The conservative Club for Growth is sending a warning shot at former President Donald Trump on the eve of his expected 2024 campaign launch — and indicating it might back his chief potential rival, Florida Gov. Ron DeSantis.

The anti-tax organization, which was once a staunch Trump ally but over the last year has broken with him, on Monday provided POLITICO with a polling memo showing the former president trailing DeSantis by double digits in one-on-one matchups in Iowa and New Hampshire, the first two states on the GOP nominating calendar. The surveys also show DeSantis leading Trump by wide margins in Florida, their shared home state, and Georgia, which is holding a Dec. 6 runoff for one of its Senate seats.

“Republicans need to be united behind a strong candidate and a platform that shows voters real solutions to beat Biden and the Democrats in 2024. Our polling shows that Republican primary voters recognize Trump’s insults against Republicans as hollow and counterproductive, and it’s taking a significant toll on his support,” Club for Growth president David McIntosh said in a statement.

The polling, McIntosh added, suggested that Trump “could help Republicans” by delaying his expected Tuesday announcement that he’s running for president until after the Georgia runoff.

The Club’s decision to move against Trump is part of a rising tide of dissent within the GOP. While the former president maintains a base of support, a number of figures in the party are blaming him for Republicans’ weaker-than-expected showing in the midterms, arguing that it’s time to move on.

According to the polling memo, which is based on survey data conducted Nov. 11-13, DeSantis leads Trump by 11 percentage points in Iowa and by 15 points in New Hampshire. Those numbers represent an improvement for DeSantis since August, when previous Club for Growth’s polling found Trump with a 15-point lead in Iowa, while the two were tied in New Hampshire.

The release of the memo represents the latest twist in a complicated relationship between the Club for Growth and Trump. After savaging Trump during the 2016 campaign, the conservative group became an ally during his White House tenure. McIntosh was an informal adviser to Trump following his 2020 election loss, with the Club for Growth leader helping to shape the former president’s endorsements in key midterm races.

At one point during the back-and-forth last spring, Trump sent McIntosh a text message through a personal assistant that told the Club head to “go fuck yourself.” Vance ultimately won the primary and, later, the general election.

The feud intensified earlier this fall when the Club for Growth donated $2 million to bolster DeSantis’ reelection bid and another $1 million to a super PAC aligned with another prospective Trump challenger, South Carolina Sen. Tim Scott. The group also held an education policy event with Texas Sen. Ted Cruz, another possible GOP 2024 candidate, in Nevada, which hosts an early nominating contest.

Taylor Budowich, who heads MAGA, Inc., the principal pro-Trump super PAC, fired back at the Club on Monday. He argued that the group had failed in many of the midterm races it invested in and called into question the accuracy of the group’s polling data.

“Sadly, many conservative donors have been hoodwinked by the Club for Growth as they’ve funneled millions of dollars into losing candidates,” Budowich said. “Their polling is consistently wrong, seemingly cooked up for the sole purpose of squeezing an extra seven-figure contribution out of trusting benefactors — and looking back at 2022, what do they have to show for it?”

“When they cross Trump, they lose, and that’s not going to change,” Budowich added, referring to the Club for Growth’s failure to defeat Trump-endorsed Senate candidates in states including Ohio and Pennsylvania.

Trump allies have also faulted McIntosh for persuading the former president to endorse Club for Growth backed House candidates in Texas and North Carolina who went on to lose their races. Club for Growth officials, however, have pushed back on the criticism from Trump’s orbit, saying they spent extensively to boost the same candidates Trump endorsed — in many cases, even more than Trump’s political operation did.

The Club for Growth’s polling memo includes numbers on a potential Trump-DeSantis head-to-head matchup. It does not have data on a crowded field of other potential candidates who could run, such as Virginia Gov. Glenn Youngkin, former Vice President Mike Pence or Scott.

Should other candidates jump in, it could lead to a splintered field of Trump rivals — potentially diluting their support and creating an opening for Trump to win contests with a plurality of the primary vote. That was the scenario that unfolded during the 2016 GOP primary.

Another recent survey of a 2024 GOP primary, which wasconducted by Morning Consult just before last week’s election, showed more favorable results for Trump. According to the poll, Trump led the field with 48 percent followed by DeSantis at 26 percent.

However, yet another poll taken after the midterms, by YouGov, showed DeSantis leading Trump 41 percent to 39 percent.

Trump has lashed out at DeSantis in recent days, nicknaming him “Ron DeSanctimonious,” and saying that he will release unflattering information about him should he run. DeSantis, who enjoyed a blowout reelection win last week, has refused to rule out a 2024 bid.

Starting in January, the Club for Growth began including a question in its surveys asking whether people would support Trump or DeSantis in a 2024 primary. The polling was part of a broader effort to measure Trump’s popularity in the party and the impact he was having in GOP primaries during the 2022 elections.