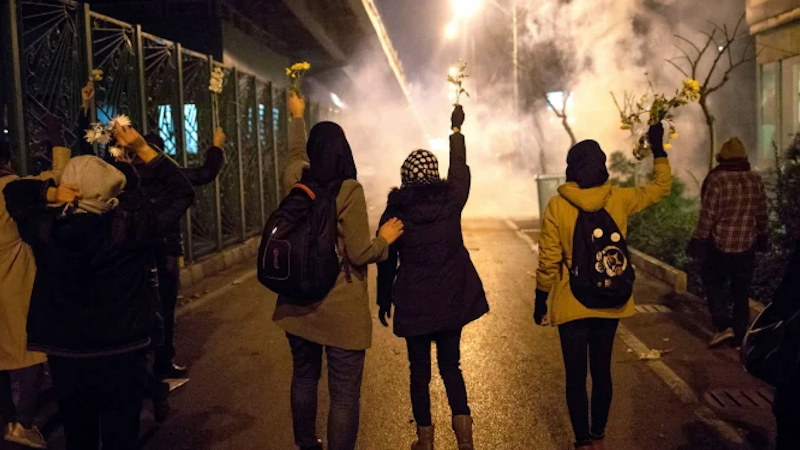 With Iran’s protests about to enter their third month, there has been an increase in the number of violent clashes between protesters and security forces. In response to the regime’s inability to quell the protests and preserve the last semblance of its rapidly eroding legitimacy, it has resorted to peddling conspiracy theories, which have now become wholly unconvincing even to its supporters.

In pursuing this predictable path, the regime has also launched attacks on Iranian-Kurdish opposition positions in northern Iraq. In fact, Iran has antagonized its neighbors one by one, in contradiction to the directives of President Ebrahim Raisi, who had previously spoken about the need to improve the country’s relations with neighboring states.

After failing to persuade Iranians not to watch Iran International, a satellite channel run by dissidents overseas, the regime resorted to accusing Saudi Arabia of supporting and financing the channel, which it accuses of inciting the Iranian public and of being behind and instigating the popular protests. In reality, the Iranian people’s loss of trust in the regime’s state-run media, which has, for years, flagrantly promoted blatantly false claims and falsified the truth, is largely responsible for the high viewership for Iran International and other dissident Persian-language media outlets. It has become clear to the Iranian people that the channels broadcasting from outside the country convey truths about the regime based on direct observations and eyewitness accounts.

Iran’s complex landscape formerly lacked Daesh, but its alleged recent emergence has compounded the complexities. Iran last week announced the capture of a Daesh terror cell responsible for the attack on the Shah Cheragh Shrine in Shiraz, southern Iran. According to a statement issued by the Ministry of Intelligence, some 26 terrorists were apprehended, all of whom were non-Iranians from Azerbaijan, Tajikistan and Afghanistan.

This official narrative, which appears to be implausible at best, raises a number of points. Though terror outfits such as Daesh have members from various countries, they most likely operate within a specific geographical area, as evidenced by their gatherings in some provinces of Syria and Iraq. A complex operation like the one carried out in Shiraz would require the smallest possible number of terror operatives, who would have built strong mutual trust and relations over many years of work and cooperation. If the terrorist attack had been blamed on a Kurdish or Balochi armed group, the Iranian people might have been convinced. However, it is clear that the regime has fabricated an incident to deflect attention from the nationwide protests and to rally the Iranian people around it.

Iran has been desperately seeking pretexts to antagonize its neighbors, to the point where a state-run newspaper called Iran blamed the UAE for anti-regime slogans chanted by fans following a beach football game between the Emirati and Iranian teams in Dubai. It is obvious that the Iranian accusations and threats against the UAE lack any logic and are nothing more than a desperate attempt to incite nationalist sentiments and turn Iranian public opinion against the UAE, especially given that the slogans chanted against the regime were sung by Iranians living in the UAE.

Perhaps what best refutes the Iranian allegations in this regard and exposes the true goals behind them is that the Iranian beach football team, which the regime sent to represent the country, put it in an awkward position with its refusal to celebrate being crowned despite winning the tournament. This was an expression of solidarity with the protesters in Iran — a gesture widely praised by Iranians inside and outside the country. The refusal to celebrate was a moving expression of solidarity with the ongoing protests in Iran, which erupted following the morality police’s killing of Kurdish woman Mahsa Amini at a detention facility in September.

By leveling its latest ludicrous accusations against the UAE, Iran has now placed most of its neighbors on the same blacklist, indirectly blaming them for all of the country’s problems. According to the Iranian regime’s perception, insecurity in Sistan and Balochistan stems from Pakistan’s complacency with the Balochis and its failure to closely monitor their shared border. The same holds true for the Kurds in Iraq. Saudi Arabia has been accused of supporting media outlets that have revealed the truth about what is going on in Iran. Tehran has also added Azerbaijan and Afghanistan to its blacklist under the guise of them exporting terrorists.

This is quite ironic, given that Azerbaijan announced on Nov. 1 that it had detained 19 individuals linked to Iran’s intelligence services who were planning terrorist operations in the country.

Tensions between Tehran and Baku have escalated over the last month in light of a prominent Azeri separatist appearing on television in Azerbaijan and giving interviews on various public networks. He has called for the overthrow of the Iranian regime in the midst of the ongoing nationwide protests. Azerbaijan President Ilham Aliyev has added to the tensions by remarking that he would continue efforts to ensure Azeris in Iran will never lose their ties with their historical homeland. In response, Iran summoned Azerbaijan’s envoy to Tehran to lodge a complaint against what it classed as “anti-Iranian” propaganda coming from senior Azeri officials.

It is important to note that Iran cannot expect its neighbors to remain passive while it hurls accusations at them and carries out proactive acts, in this case adopting a pro-Armenian slant and conducting military drills in its northern provinces bordering Azerbaijan.

In a nutshell, the Iranian regime may be able to buy some time through these conspiracy theory-drenched narratives about the ongoing protests, and it may also repress them violently, but it is well aware that the true causes of these protests are primarily internal, with some of them linked directly to its political structure and the interests of the ruling elite surrounding the supreme leader and the IRGC, who cling to power and harness the country’s resources for their personal interests at the expense of societal welfare and progress.

As long as the Iranian regime continues to ignore these causes, exclude voices of reason and hurl accusations at outsiders, nothing will change or improve on the domestic front. There is no doubt that protests will erupt again, possibly on a larger scale than the current and previous waves, not as a result of a new conspiracy but for the same causes and because of decades-old wrong policies and decisions.

Today24.pro
Goldman issues stock market warning Crypto Lender Matrixport Raises Valuation to $1.5B Despite FTX Collapse I'm convinced Facebook Marketplace is Meta's best feature after I furnished my new apartment with used furniture ‘How many Uber drivers does it take to pick up a disabled person?’: Disabled person says 3 Uber drivers canceled on them because of their service dog