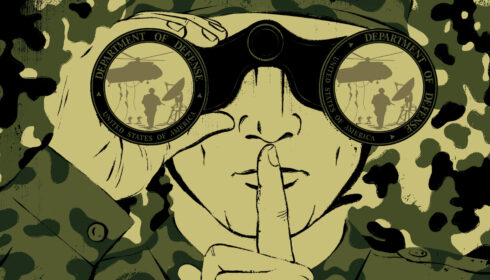 To get to where they are, imperial powers will deceive, dissimulate and distort. The US imperium, that most awesome of devilish powers, has tentacled itself across the globe, often unbeknownst to its own citizens.

In a report released by the New York University School of Law’s Brennan Center of Justice titled Secret War: How the US Uses Partnerships and Proxy Forces to Wage War Under the Radar, there is little to shock, though much to be concerned about.  The author of the report contends that the list of countries supplied by the Pentagon on US military partnerships is a savagely clipped one.  The list is so wrong that 17 countries have been omitted.

Katherine Yon Ebright, counsel in the Brennan Center’s Liberty and National Security Program, betrays a charmless naivete in remarking that the “proliferation of secret war is a relatively recent phenomenon”, something she regards as “undemocratic and dangerous”.  She is certainly right about the last two points, but distinctly wrong about the novelty.

The United States, since its inception, has schemed, through purchase, conspiracy and force of arms, to spread its power and embrace an empire without declaring it.  Along with that embrace came the perceived need to wage secret war.

The illegal, covert engagement by US forces in Laos was one of the most brutal examples of a clandestine conflict waged unawares to many politicians back home.  It was, as the dark title of Joshua Kurlantzick’s book on the subject suggests, a great place to have war.

It began with a Central Intelligence Agency outfit training and arming members of the Hmong ethnic minority who would, some 14 years later, partake in full scale engagements with Communist allies of the North Vietnamese.

This development was accompanied by an aerial campaign that saw more bombs dropped by the US than used by its air force in the entirety of World War II.  Between 1964 and 1973, more than 2.5 million tons of ordnance from over 580,000 bombing sorties was dropped.

US lawmakers tend to express much surprise that US forces should mysteriously appear in countries they can barely find on the map.  But to a large extent, the circumstances arose with their own connivance.  The authorising backdrop to such engagements centre on a number of instruments that have proliferated since September 11, 2001: the US Title 10 authorities, the 2001 Authorization for the Use of Military Force (AUMF), deployment notifications under the War Powers Resolution, and the souped up idea of the right to self-defence.

Of concern here is the broad umbrella of “security cooperation” programs that are authorised by Congress under the AUMF against designated terrorist groups.  Codified as 10 U.S.C.§ 333, the provision permits the DoD to train and equip foreign forces in any part of the globe.

Section 127e, or 10 U.S.C. §127e, stands out, as it authorises the DoD to “provide support to foreign forces, irregular forces, groups or individuals engaged in supporting or facilitating ongoing military operations by United States special operations forces to combat terrorism.”

The 2001 AUMF has become an instrument of vast elasticity, stretched by every administration since its inception to cover a list of terrorist groups that remains secret to the public.  The executive had long withheld the list from Congress, something it was bound to do given its cavalier interpretation as to what “associated forces” in the context of terrorist groups are.

The DoD has also kept quiet on the specific circumstances US forces operate under these authorities.  As Ebright puts it, the reasoning at play is “that the incident was too minor to trigger statutory reporting requirements.” Confrontations deemed “episodic” and part and parcel of “irregular” warfare do not amount to “hostilities”.

Another accretion of secrecy, and one aided by its important premise of deniability, is the Presidential Approval and Reporting of Covert Actions, 50 U.S.C. § 3093 (1991).  Again, the 9/11 terrorist bogey has featured in targeted killings and assassinations, despite assertions to the contrary.

Perhaps the most startling nature to such cooperation programs is the scope granted by Section 1202 of the National Defense Authorization Act of 2018.  While it mirrors Section 127e in some respects, the focus here is not on counterterrorism but supporting “irregular warfare operations” against “rogue states”.  Ebright strikes a bleak note.  “Far beyond the bounds of the war on terror, §1202 may be used to engage in low-level conflict with powerful, even nuclear, states.”

Every now and then, the veil of secrecy on such operations has been pierced.  In 2017, four members of the US Army Green Berets, along with four soldiers from Niger, were killed in an ambush outside the village of Tongo Tongo.  It was the highest loss of life for US military personnel since 1993, when 18 Army Rangers perished in the Somalian Black Hawk Down incident.

What was head shakingly odd about the whole affair was not merely the surprise shown by members of Congress by this engagement, but the nonplussed way the Joint Chiefs of Staff chairman, General Joseph Dunford, called for an investigation.  His sole objectives were to ascertain whether US forces had “adequate intelligence, equipment and training” and whether there was “a pre-mission assessment of the threat in the area” of appropriate accuracy.  Surely the more relevant question would have been what these modern kitted-up Roman legionnaires were doing without broader awareness back home?

The findings of the summary report, and those of Pentagon officials, was that militants in the area had “superior firepower”.  For every US and Nigerien soldier came three attackers.  Again, this misses the overall point about clandestine operations that even some in the upper echelons of Washington know little about.

Despite a number of public statements claiming that the US military role in theatres such as Africa are confined to “advising and assisting” local militaries, the operational reality has occasionally intruded.

In 2018, the now retired General Donald Bolduc, who commanded US special forces in Africa till 2017, had enough boastful candour to reveal that the army had “guys in Kenya, Chad, Cameroon, Niger [and] Tunisia who are doing the same kinds of things as the guys in Somalia, exposing themselves to the same king of danger not just on 127 echoes.  We’ve had guys wounded in all the types of missions that we do.”

Ebright recommends that mere reform of “outdated and overstretched AUMFs” will not do.  “Congress should repeal or reform the Department of Defense’s security cooperation authorities.  Until it does so, the nation will continue to be at war – without, in some cases, the consent or even knowledge of its people.”

That’s hardly going to happen.  The security establishment in Washington and a coterie of amnesiacs are keen on keeping a lid on the fact that the US has been a garrison, warring state since 1941.  And the next big conflict is just around the corner.  Appearances must be kept.

The post The Secret Wars of the US Imperium appeared first on South Front.

Today24.pro
‘How many Uber drivers does it take to pick up a disabled person?’: Disabled person says 3 Uber drivers canceled on them because of their service dog Crypto Lender Matrixport Raises Valuation to $1.5B Despite FTX Collapse I make $1,000 a month by promoting Amazon products on social media. It only takes 5 hours per week — here's how I set up my side hustle. Billionaire investor Howard Marks touts a bargain boom as interest-rate fears grip markets - and predicts a surge in companies going bankrupt