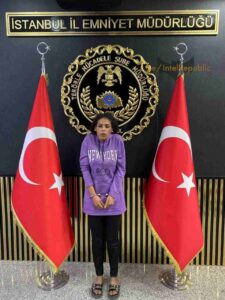 Turkish Interior Minister Süleyman Soylu commented on the terrorist attack in the center of Istanbul, refusing to accept the condolences of the United States.

The explosion in Istanbul took place on November 13 on the  Istiklal street in Istanbul and claimed lives of six people, at least 81 others were injured. The Istanbul Prosecutor General’s Office has qualified the explosion as a terrorist attack.

The Istanbul police announced that the terrorist attack was committed by a woman born in 1999, a Syrian citizen. According to the authorities, she was trained by detachments of the Kurdistan Workers’ Party. After the explosion, she ran away from Istiklal Street and got caught on surveillance cameras. The woman reportedly planned to flee to Greece, but was quickly captured by security forces.

“According to our estimates, the order came from Kobani, and the perpetrator of the attack came from Afrin . <…> The evidence available to investigators indicates that the explosion was organized by the Democratic Union Party (the military wing of the Kurdish Workers’ Party in Syria)”, Anadolu agency reported, citing Soylu.

The Turkish Interior Minister criticized the official condolences of the United States and noted that a response would follow in the near future.

“We do not accept condolences from the US Embassy. We are not betraying anyone, but we can no longer tolerate betrayal,” he said, claiming that the Turkish authorities “knew where the attack was coordinated from. … And the reaction to this message will be very clear. This will be seen in the near future, with the permission of Allah,” he said.

The US military continues to support Kurdish forces during the conflict in Syria. In June, Erdogan announced the launch of another anti-terrorist operation aimed at the destruction of the Kurdistan Workers’ Party formations. This is the fifth operation of the Turkish army in Syria since 2016. The US State Department criticized Ankara’s decision.

The post Ankara Refused To Accept US Condolence On Terrorist Attack In Istanbul appeared first on South Front.

Today24.pro
Man repeatedly punched Columbia protester, knocking her out: NYPD Five ways struggling families can get free cash to help pay for food this Christmas The Darkest Secret and Tragedy of Edwin Valero In the age of megachurches, communion has become a big business